By LRU Writer | On: August 28, 2018
Vogue Williams is married to.....Model walked down the aisle with the beautiful wedding dress designed by....She is pregnant with the first child and the due date is very near... 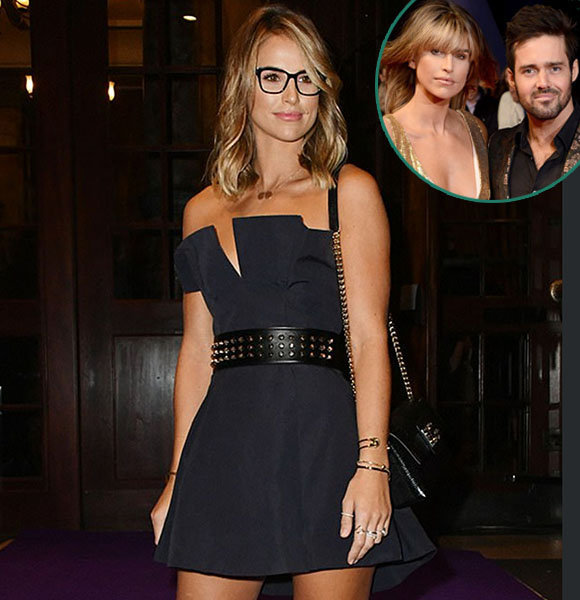 Commencing her career as a reality star, 32 aged Vogue could not relax away from the prying eyes of the cameras. And so, she starred on the fourth series of The Jump where she met the life partner though she had to back out due to injury.

As of now, she got married to her fiance and is astonishingly waiting for the arrival of their first child which is just a week away.

Intimate Wedding; Baby On The Way

Five months after Vogue Williams and her fiance announced the news about the greatest addition in their life, the couple is finally ready to disclose their intimate wedding ceremony that took place in June 2018.

The soon-to-parents exchanged their wedding vows on the banks of the picturesque loch on Spencer’s family’s 30,000-acre estate in front of the limited intimate family members including Spencer's brother James and his wife, Pippa. It was a simple and intimate outdoor ceremony that has been kept a closely-guarded secret until now. But finally, the couple spoke about their intimate wedding with the Hello Magazine.

The wedding, which took place in June 2018, is the best wedding ever as described by Spencer as he had witnessed the wedding of his brother James and Pippa Middleton. He said:

"It has gone down by many as the best wedding they’ve ever been to. It was a family affair in the middle of nowhere and it felt very secluded. We were surrounded by the people we love."

The wedding was a relaxed affair, with Vogue walking down the aisle with the Paul Costello's designed wedding dress showing her baby bump.

"Everything has fallen into place. As we’ve said before we are best friends, we love being together, so it does feel just perfect. We’re delighted. I can’t imagine life without Vogue at this point. People say, what’s changed? What’s different? But it’s just part of growing up, meeting your soul mate and moving on with life."

The secretly married couple Vogue Williams and Spencer Matthews started dating after meeting on the Channel 4 reality series, The Jump in 2017.

Though the couple shared some chemistry on the show, Vogue did not witness Spencer crowning the winner of the series as the 32 aged Dublin blonde had to pull out of the show after injuring herself in rehearsals before the show even commenced.

You May Also Like:- Demi Rose Bio: From Dating DJ Boyfriend To Stunning Measurements Of Instagram Star

Since all the contestants of the show stayed in Austria for weeks to practice, Vogue and Spencer soon sparked speculation they were more than friends with several appearances on each other’s social media accounts.

At first, they were both tight-lipped about their relationship however, Vogue admitted that she was off the market to the Irish Mirror back in March 2017. Keeping the identity of her man shut to herself, the pair went on a romantic getaway to the Disneyland Paris to celebrate the theme park's 25th anniversary where Spence joked to TV3’s Xpose that he and Vogue “had a kid on the way”.

Vogue Willams got engaged to her boyfriend Spence Williams after he popped the question in early February 2018 at the backstage of The Lion King in London.

After one year of dating, Pippa Middleton's brother-in-law finally exchanged the ring and explained:

"I’ve known Vogue was the one for a long time. We’re very happy and in love. She’s my best friend and I can’t wait to spend the rest of my life with her.

After the engagement, she announced that she was four months pregnant with their first child on 18 March 2018.

This is Spencer's first marriage whereas it's Vogue's second wedding. Formerly, she wed former Westlife singer Brian McFadden in 2012 in a lavish ceremony and the couple split in 2015.

Born on 1985, Vogue celebrates her birthday in October, has two sisters and a brother. The couple walked down the aisle when she was seven months pregnant with their first child. The couple has been featuring their pregnancy journey through their social media.

It seems the two brother's James and Spencer will have their first child almost in the same month as Pippa is also pregnant with her first child. The happiest father-to-be took to Instagram to announce the happiest news sharing the picture with the love of his life writing:

So... I’m going to be a father! Couldn’t be happier to be sharing these times with the love of my life @voguewilliams . We feel truly blessed

“I can’t wait. I’ve always loved children and been fascinated with them. I have three nieces, a nephew, and seven godchildren so I’m always around them. I can’t wait to watch my son grow up, to play sports with him and see his first day at school.

“Vogue and I want four kids so I think it’s nice for the eldest to be a boy, especially if our next is a girl. I like the idea of my daughter having an older brother to look out for her, especially if we still live in London and she wants someone to party with. After a week, Spencer's family will turn to three from two, but the couple has already decided that Vogue's sister would be their child's godmother, whom Vogue regards as the best person in the world.