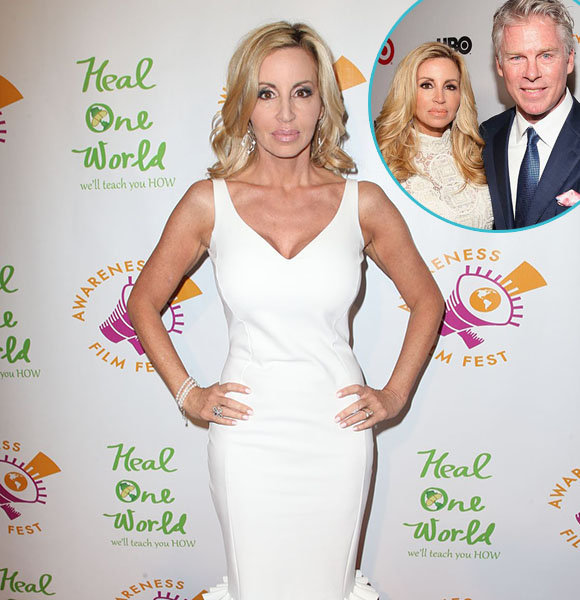 The Real Housewives of Beverly Hills star Camille Grammer exchanged the wedding vows with her long-time boyfriend David C. Meyer, who is a lawyer by profession working as an attorney with the Arent Fox firm.

Camille married her long-time partner in a destination wedding ceremony that took place at a private beach club in Kohala, Hawaii. Camilla, who had previously been married to Kelsey Grammer, divulged about the new beginning in her life saying,

“This is my next chapter. I’m so excited to start our life together.”

Well, Camille and David wed in a Hawaiian-inspired outdoor ceremony which was accompanied by their invited guests. The guest list itself was star-studded one including her The Real Housewives of Beverly Hills co-stars and some popular names such as Kyle Richards, Lisa Rinna, Dorit Kemsley, and Teddi Mellencamp.

During the wedding, Kyle served as a bridesmaid along with Camille's 16-year old daughter, Mason, who she shares with her ex-husband Kelsey. Camille and Kelsey's son Jude, age 14, was also the part of the nuptial as he walked his mother down the aisle.

Turns out, Camille's daughter had her big hand at the wedding as she helped Camille pick out the wedding dress for her big day.

Well, Camille and David had been planning for the wedding for a while now after they got engaged back in October 2017. The proposal came nearly two years since they began dating. David, who is also previously married and shares two sons with his ex-wife, presented the love of his life with an engagement ring and asked her to marry him.

Indeed, the couple sure makes a perfect match for each other as they both have been through a divorce and already are proud parents. Prior to tying the nuptial knot, Camille opened up about her thoughts on marriage after the end of her first one. She said,

"I miss being married. I don’t miss my ex, but I really loved being married, so I really look forward to having a lifetime companion and somebody to spend my life with and share special moments with."

Moreover, she even revealed her love and understanding for her partner saying,

"We’ve both been through divorce, we understand each other … He’s very bright and he’s successful in his own right, so it’s not somebody that I have to support or train, you know?"

Well, with their utter understanding the couple sure are going to make through their married life with their new beginnings.