Katie Holmes Engaged To Boyfriend! How's Everybody Reacting To The Ring

By LRU Writer | On: November 01, 2018
Katie Holmes is "supposedly" engaged! She gave rise to engagement rumors with boyfriend after seen wandering the streets of New Orleans with an engagement ring. 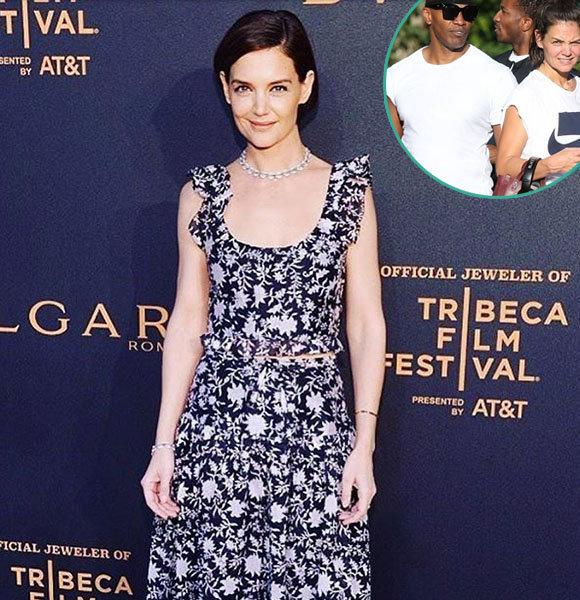 She gave rise to engagement rumors with boyfriend after seen wandering the streets of New Orleans with an engagement ring.

The Woman In Gold actress raised engagement gossips recently on 29th October 2018 after she was spotted in New Orleans wearing a diamond ring on her left hand. Katie has been supposedly dating actor Jamie Foxx since the August of 2013, and the alleged pair has been seen showing public display of affection on numerous occasions.

The gossips about the two dating and an engagement ring on her finger led many to believe that Katie and her boyfriend have finally decided to take a step forward in their relationship by getting engaged.

However, to fans' disappointment, a representative for the 39-year-old actress revealed that the ring was a prop for her upcoming movie and Katie is not engaged to anyone. The source said,

“Katie’s not engaged to anyone besides her fictional movie fiancé, played by Jerry O’Connell.”

The source further mentioned that Katie is currently shooting for The Secret, based on the self-titled book about power derived from a positive attitude and thinking.

Katie and her assumed boyfriend Jamie were first observed dancing together at the 4th Annual Appolo event held in the Hamptons in 2013, nearly a year after her split from ex-husband, Tom Cruise.

Most recently in September 2018, Katie made several trips to Georgia where Jamie was filming for Just Mercy. During her visit, the couple enjoyed sharing a bike ride and even a gym session together.

Previously in July of 2018, the pair was also noticed kissing during a date at the Malibu beach. A source close to Katie stated that even though Katie and her alleged boyfriend have not come out officially as a couple, the pair is indeed dating. The insider explained,

"Everyone knows they are dating, but they still want to keep it private. After the beach pictures, they only spent time together at home and got extra careful. But this year, they have been more social together. They often go to restaurants for dinner dates, or to hang out with friends.”

Katie currently lives in New York while the Django Unchained actor lives in Los Angeles but the couple frequently visits each other.

Prior to Katie's relationship with Jamie Foxx, the Batman Begins actress was married to the Mission Impossible franchise actor Tom Cruise. The former husband and wife had tied the knot on 18 November 2016.

The now-divorced couple even has a 12-year-old daughter from their marriage named Suri Cruise. Katie and Tom finally separated on 18 April 2012 after she filed for a divorce.

It has been revealed that there is a clause in their settlement agreement which bans Katie from publicly dating anyone for the next five years of their divorce which many assume is the reason for Katie keeping her relationship private.