Liam Hemsworth & Miley Cyrus Are Married! A Wedding Over Christmas

By LRU Writer | On: December 27, 2018
Australian actor Liam Hemsworth and Miley Cyrus make the Christmas "funky" with their low-key wedding! The 28-year-old Australian actor got married to his pop star girlfriend of more than a decade, Miley as revealed by the latter's most recent tweet. 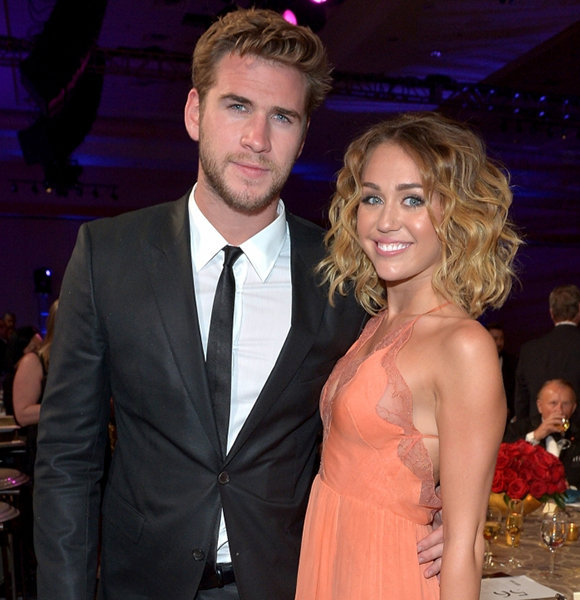 The 28-year-old Australian actor got married to his pop star girlfriend of more than a decade, Miley as revealed by the latter's most recent tweet. Sent out on 27th December 2018, the tweet featured an image of the two embracing each other from - most likely - their wedding day alongside a caption that read:- Several hours later, Liam shared the same image as above on his Instagram and thus confirmed the marriage between the two. Like his bride, he too captioned the photo with a short but sweet message:-

Around the same time, Miley shared a video of her dancing to Mark Ronson & Bruno's record "Uptown Funk" while still donning her wedding dress on Twitter. Liam too makes a brief cameo towards the end of the said video.

Responding to the video of the pair jamming to his song, Mark congratulated the newlyweds by tweeting a video of him improvising "a remix for 2019." Author Nicholas Sparks also professed happiness on their nuptials via Twitter.

Held on 23rd December 2018, as suggested by later reports, the wedding ceremony was as intimate as only close friends & family were in attendance.

As for the location of their intimate wedding, the Hunger Games star & the Wrecking Ball songstress, age 26, opted to get married at a private estate owned by the latter in Franklin, Tennessee.

Originally, Liam and his longtime girlfriend planned to get married in Malibu. But, after the November's devastating California wildfires which burned down their ocean-side home, the lovebirds moved the location. Speaking exclusively to PEOPLE, a close source - following the news of their marriage - quipped:-

“They had planned to get married in Malibu over the holidays when all of their families were together. After their Malibu house didn’t make the fire, they have been living at Miley’s Tennessee house... "

Despite still reeling from the experience of losing her home, Miley claimed that she was in a much better place when she sat down for an interview with Ryan Seacrest. The Climb hitmaker then added:-

“That’s literally and physically all that’s left, so I felt that that was really poetic. You can always rebuild a physical structure, but that love that can’t be destroyed is always there and always stays strong. That’s been something that gave me a lot of light at a dark time.”

Although Miley may not have intended to do so, many took her words as a metaphor for her tumult relationship with Liam. Since meeting on the set of The Last Song in June 2009, the newlyweds' dating life was a regular fixture in the gossip column of almost all media outlets.

Explore The Unknown:- Ex on The Beach US Season 2 On MTV, The "New" Cast & Spicy Drama A year into dating each other, the co-stars turned lovers relationship experienced their first break up. A month later, they reunited but only to break up again. And in June 2012 - to everyone's surprise - Miley, who is sisters with Brandi Cyrus, announced their engagement.

Unsurprisingly though, Liam and his then-fiance call off their engagement in August 2013 following Miley's infamous twerking on stage. After deciding to become friends, they finally got together, only to part ways in April 2015.

And in January of 2016, the former Disney sensation got spotted with a diamond ring. She later confirmed the engagement rumors in an interview at The Ellen DeGeneres Show. Ever since the interview, the smitten duo has relatively avoided a public fallout -- a clear indication of what to come next.