By LRU Writer | On: September 19, 2018
Married At First Sight alum, Sam Role is a mom for the first time at the age of 33! Sam, age 33 and her Analyst fiance, Chris Wise welcomed their first baby, Isabella on 7 September 2018 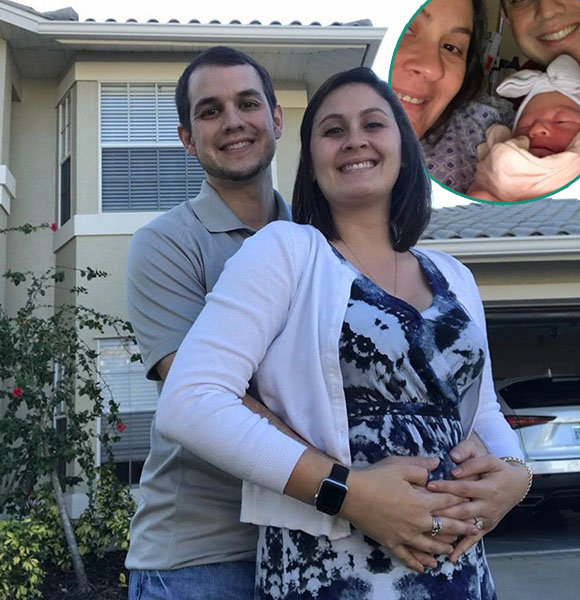 Married At First Sight alum, Sam Role is a mom for the first time at the age of 33!

However, it was PEOPLE magazine who first reported on the news on 18th September 2018. Sam and her fiance, Chris with their baby daughter, Isabella (Photo:- People.com)

As per the caption, Baby Isabella weighed a healthy 7 lbs., 2 oz., and measured average at 18 and a half inches long. And hours after the PEOPLE article was published, she took to her Twitter to address the news. She tweeted:

“I'm so excited to welcome Isabella to the world!! I’ve never loved someone so much. #MommyLifeIsTheBest  #WhatsSleep”

Sam’s baby daughter, Isabella - whose middle name is Myra - is an homage to the Married At First Sight alum’s grandmother named Myra.

Back in March 2018, Sam had announced the news of her being pregnant with her fiance, Chris via Instagram. Sam announces the news of her being pregnant with fiance's baby (Photo:- Sam Role's Instagram)

The news of her being pregnant came just two months after she revealed that she and her then-boyfriend, Chris had gotten engaged. Along with the snap of the newly-engaged couple, the reality star shared a caption that read:

"I flew to #ATL this weekend to celebrate @chrisw1687 birthday, Not only did I get to spend time with him, but HE PROPOSED! #ISaidYes."

Neil even congratulated her and her fiance, Chris, when she announced the news of her pregnancy. Replying to Sam’s tweet, he tweeted:

"Congratulations @Sam_MAFS. Super excited for you and the family!! You will be a great momma "

Her ex-husband even suggested that the pair might want to name their kid Cornelius if the baby turns out to be a son. Thankfully, Sam and Chris’ baby turned out to be a girl and opted to go with the much more conventional name i.e. Isabella.

Congratulations to both Sam and her fiance, Chris on their first child!