By LRU Writer | On: March 14, 2019
Most have made some of the serious lifestyle changes since three years, and she has succeeded in losing her weight dramatically. She has hosted an American talk show in ABC network for a long time. Yes, we are talking about Rosie O'Donnell. So, what’s the reason behind her weight loss? Before going to that subject, let us introduce briefly about her. 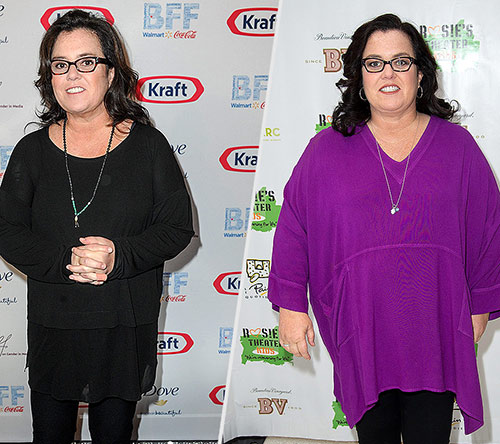 She made some of the serious lifestyle changes for three years, and she succeeded in losing her weight dramatically. She hosted an American talk show in ABC network for a long time. Well, we are talking about Rosie O'Donnell.

She gave a gasp with her amazing weight transformation. But, what’s the reason behind her weight loss? Before going to that subject, let us introduce briefly about her.

Who Is Rosie O'Donnell?

Rosie O’ Donnell is a well-known film actor, and comedian, who served at the talk-show host at “The Rosie O’Donnell Show” & “The View”.

Also an LGBT activist, she was married to Michelle Rounds from 2012-2016. After her failed marriage with Michelle, tragedy struck Rosie when her ex-wife died from suicide in 2017. Previously, she was married to her partner Kelli O'Donnell since 2004 before they divorced in 2008.

One would swear to never fall in love after two failed marriages, but not out-spoken host Rosie. She fell in love with Elizabeth Rooney, a police officer by profession after running into her in a charity benefit.

After the love affair started, it quickly became serious; Rosie proposed her girlfriend over the summer in 2018. Lucky for her, Elizabeth accepted her proposal. Although, an engaged woman, the television host didn’t reveal when she will get married for the third time in her life.

For her police officer girlfriend, it will be the first marriage. After tying the knot, she will be stepmother to five children; Rosie-Parker, Chelsea, Blake, Vivienne, and Dakota.

Rosie had an overweight body. In 2012, After having the heart attack and nearly dying, she went for gastric-bypass behind her reservation. The days were hard for her to pass on.

She opened about her reason behind weight loss in “Dr. Oz Show” aired on ABC news in 2015. She said.

She made a great change in her life; she was rewarded with the loss of 64-lb weight loss. In 2015, she told people.com on the Red Carpet that

Believe it or not, that surgery changed my life. For me, it’s been two years. It used to be on Halloween, the week before, I would start sweating until Christmas because I had huge problems not going and stealing their candy. I couldn’t be in bed and go downstairs. There would be four bags of candy. I couldn’t help myself.

She got her show when she was 35; she was over 200 lbs. At that time, before that, she was only 170. Due to which she got pressure and stress. She would have another heart attack if she didn’t have surgery. Finally, it was a good day that she survived.

In 1996, she started hosting the daytime show called “The Rosie O’Donnell Show.” Talk show host even donated $1 million dollars to the American Red Cross to help victims of ‘September 11’ attacks.

Rosie, an LGBT activist, went to daytime talk show after the success of her role in the film, A League of their own (1992).