Antonia Lofaso's Life After The Loss Of Her Husband 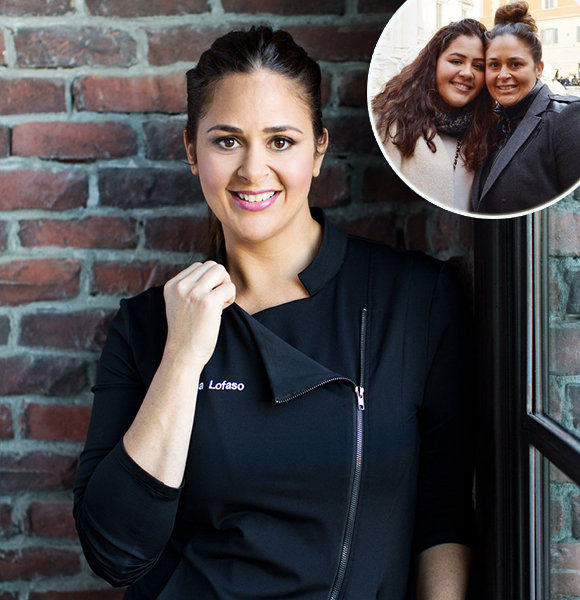 It's close to impossible to put the feeling of the loss of a dear one into words. But their physical absence doesn't mean they have bid goodbye to us forever. We keep them alive with our remembrance, and it is believed that they have become our guardian angels who protect us from heaven.

Similarly, the executive chef, Antonia Lofaso, believes she remains under the constant protection of her former husband, who sadly passed away many years ago.

So, without further ado, let's get in touch with the personal life of Antonia Losafo.

Although being a busy chef doesn't offer enough personal time, Antonia Lofaso managed to keep a successful relationship with her husband, Heavy D. However, the timeline of their dating affair remains away from the media.

Even though the couple didn't marry, they did share a husband-wife bond. They also welcomed their baby girl in 2000 and named her Xea.

Discover:- Sami Zayn Is Married With Wife & No One Knew; Love, Religion, Facts

After getting blessed with their bundle of joy, they tried their best to manage their busy schedules to give her proper time.

Unfortunately, in 2011, about a decade down the road, Antonia had to suffer the tragic loss of her husband, Heavy. Some sources state that the reason for his demise was his illness, as he was a victim of pulmonary embolism, but Antonia has not confirmed it.

It was really hard for Antonia to lose her husband but she didn't give up for the sake of her child.

The loving husband and father, Heavy D, will forever remain alive in their memories. Xea, who is currently 22 years, shared a picture via her Instagram remembering her late father. However, the mother and daughter duo have a great relationship. In February 2017, she shared a photo with her girl on her Instagram. Back in 2015, during an interview with Mom, when asked how she balances time between her work life and home life, Antonia asserted that she gives importance to the quality of the time and loves to spend it with her daughter on vacations.

The only way that I find balance is the constant reminder that it isn’t the quantity of time but the quality of time. Spending four days in Mammoth with my daughter over Valentine’s Day weekend and snowboarding with her—it’s that kind of experience. As soon as we step into Los Angeles, I was like, "Gotta go!" But, when we were snowboarding it was like an excursion together and we have these hilarious fun stories to talk about, and we have us tumbling down a double black diamond that was totally caught on her GoPro. It’s like that, the quality of time spent together where the balance comes.

On her daughter's 21st birthday, the 45-year-old took to her Instagram to wish her a happy birthday. The post featured her all-grown-up girl's selfie flaunting her curls and a heartwarming caption that reads,

Light the world on fire baby girl...... happy 21st birthday XEA. I used to tell her when she was young that she was mine , every part of her I grew so therefore she was mine. XEA is hers and hers alone. The most confident and determined chicken little I’ve ever met. Command a room. Speak up. Listen above all. Love above all.

She further dropped a piece of amazing information. Turns out that Xea has an interest in music. Xena's song as a lyricist was dropped on February 25, 2020, called IDK.

Read Also:- Despite Divorce, Samantha Speno, is Close to Her Ex-Husband Randy Orton

Since her husband’s death, Antonia does not seem to be involved in further dating affairs and leads a happy life as a single mother with her daughter.

More On Antonio Lofaso: Married To Her Job

French Culinary Institute graduate Antonia Marie Lofaso was born on November 23, 1976, in New York City. She has also served as a manager at one of Sean Combs' restaurants, Justin's.

Antonia later started working at Wolfgang Puck's "Spago" and "Foxtail" in Los Angeles. But, the beautiful chef started gaining extensive recognition after she competed in the Bravo series Top Chef Season 4. Subsequently, she appeared in Top Chef: All-Stars and even on the Top Chef Duels spin-off. Since then, Lofaso has been known as an executive chef, and she soon ventured into the restaurant business with "Black Market" in Studio City, California.

Additionally, she also appeared in reality series like Cutthroat Kitchen and Restaurant Startup, among other things.

Apart from her cooking career, she is also a businesswoman. Antonia is a partner-owner and the executive chef of restaurants in Los Angeles, such as "Black Market Liquor Bar" and "Scopa Italian Roots."

Because of her growing success, we have reasons to believe this is just the beginning of her endeavor. Also, every now and again, she throws surprise pop-up eatery events to meet her fans' demands. We can take the example of the Latin-inspired power luncheon she organized on August 24, 2018, in LA.

She also hosts Save The Leftovers, which first premiered on February 24, 2021, at a 10 PM special. Antonia as a host of Save The Leftovers. (Source: Instagram)

Apart from hosting a show, she appeared as the head judge on Guy’s Chance Of A Lifetime. In addition, she has judged a show on the Food Network called The Julia Child Challenge along with Michael Voltaggio.

If anyone didn't know, the Cutthroat Kitchen star takes her profession very seriously; so much so that she considers her work friends a family. On one of her Instagram posts (now deleted), she boasted:

Couldn't have imagined what this life has given me. So grateful today and every day for you @xeamyers my family, our health and happiness. All of this life's work and love. Cheers to my work family!

Likewise, cooking is one entity on earth she would get married to in a heartbeat.

Stay tuned to get more updates on Antonia Lofaso.