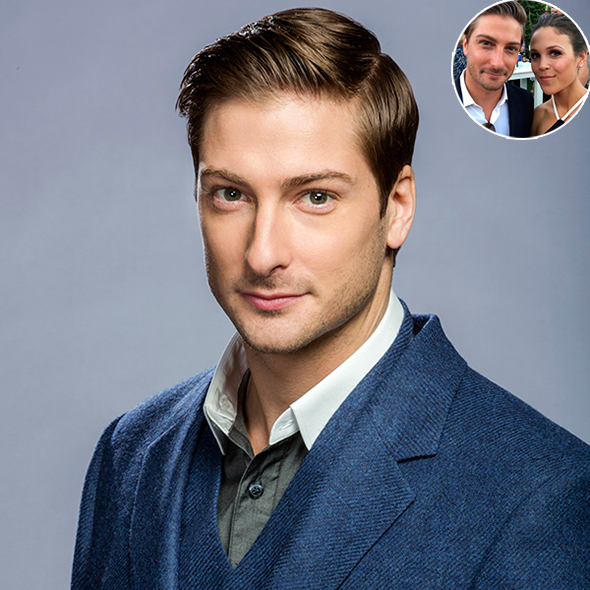 Famous Aussie actor, Daniel Lissing is now a married man. With his fame surrounding aura, the actor has welcomed many speculations; the most heard and talked about is his sexuality as a gay man.

So now the question lies, who did the actor marry? Is he really gay? or all of this is just a big misunderstanding:

Bad news to the fellas and cheers to the ladies, Daniel is a straight man. Well, let's not clink glasses yet because the actor is also married to the love of his life Nadia Lissing.

Putting all the gay rumors at bay, the actor got married to his girlfriend turned wife in a private ceremony in 2020.

The couple has decided to keep the details about their special day private and are planning a bigger family wedding soon.

Let's all rewind back; The happily married couple announced their engagement through Instagram by uploading an adorable picture. Happy news to share... I get to marry the love of my life

Shared their special announcement with the world.

Those who are big fans of Daniel and Erin Krakow must know the fact that the two of them were once close to each other.

The two have worked together for their successful project, When Calls The Heart, where Daniel played Jack Thornton and Erin played Elizabeth Thatcher, and the chemistry they shared might be the reason for them being so close to each other.

You May Also Like: Chelah Horsdal Hinting On Being Married Or Just A Pose With On-Screen Partner? Sharing similar thoughts and enjoying each other's company, people began to speculate that the two of them were dating and seeing each other.

Daniel, who had previously remained hush about the rumors regarding the duo's relationship, finally came out to reveal that the two of them solely remained good friends.

In an interview with Entertainment Tonight in March 2018, Lissing shared his experience of the on-screen marriage between his and Erin's character, and also made a huge revelation.

"Erin and I had sat down together… and I talked to her about the potential of writing our own vows, as Jack and as Elizabeth. So we took that to the producers and they were like, ‘Well, yeah, you guys know the characters better than anyone else does,’ and so we actually wrote our vows. I wrote Jack's vows and she wrote Elizabeth's, and there's that connection there. You can feel the love between these two characters, and Erin and I, as actors and as friends, have a lot of love for each other, so we really had each other's back through that whole scene."

With Daniel clarifying loud and clear that he and Erin were just good friends, rumors have since stopped circulating.

After Erin, Daniel enjoyed a brief fling with Melisa Miller, a real estate agent. It did help silence the rumors that he was gay, but provided little to no reprieve to his shaky dating life.

But, then came his girlfriend, now wife, Nadia, in the picture. The actor first gushed about his budding romance in November 2018. At the time, he professed skepticism about revealing their relationship by saying:-

“We talked about it, the whole social media thing, and where that fits into, where’s the personal life and career life and all that. She’s completely cool with it. I’m the one that’s a little like I’m not sure.”

A month before his confession, the Aussie actor had shared a snap of him and his girlfriend, now wife, Nadia, enjoying a day out. With every passing day, the smitten duo's relationship goes from strength to strength. Look no further than their Instagram profiles for proof.

Discover: Poppy Drayton Has No Intentions On Having A Boyfriend; Choosing Career Over Dating Affair?

As of 2022, he has appeared in numerous shows; namely,  the American military drama, " Last Resort" as James King, "When Calls the Heart" as Jack Thorton, "The Cleaning Lady" as Brandon, "Christmas Star" as Ryan Sparks, "The Rookie" as Sterling Freeman / Skipper Young and many more.

Even though not revealed, with more than 25 show credits to his name the actor sure has a massive rising net worth.

Witnessing the star's rising career, we cannot wait to update you guys more on Daniel Lissing!