By LRU Writer | On: February 11, 2020
Domino Kirke is an English singer/ songwriter...also stepped up as an entrepreneur...is a married woman...the couple got married in an intimate...reception was a star-studded event attended by...husband Penn Badgely is best known for...are expecting their first child together...after two miscarriages...was born...parents are... 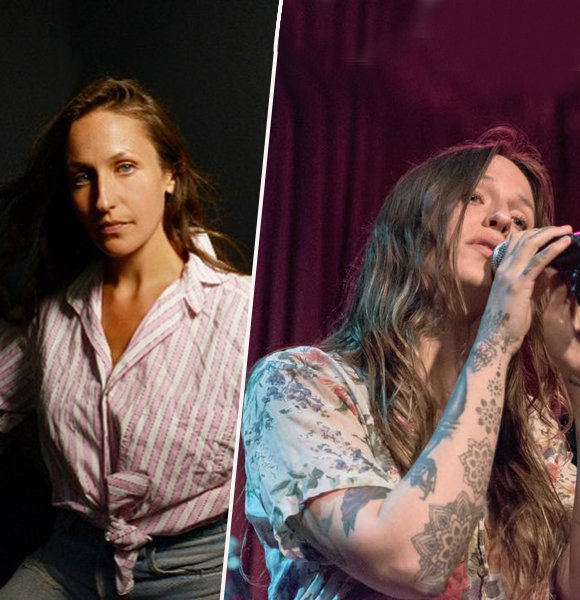 Domino Kirke is an English-American singer/songwriter who is best known for her indie-pop band, DOMINO. During her musical career, she has been on various tours with artists like Lily Allen and Gang of Four.

Further, she also stepped up as an entrepreneur in 2012, by co-founding a doula agency, called Carriage House Birth, that assists families before, during, and after birth.

Domino Kirke is a married woman. She tied the knot to the Gossip Girl star, Penn Badgeley, not once, but twice.

For the first time, the couple got married in an intimate courthouse ceremony in February 2017.

At the courthouse ceremony, Domino wore a pastel color long-sleeved lace dress, and the groom wore a navy suit. After the official ceremony, a small reception was held at Maison-May restaurant in Brooklyn. And for their second wedding in June 2017, the couple went a little bigger but not too extravagant.

They held their wedding ceremony at the bride’s mother’s stunning property in New York. Domino donned a vintage white lace wedding gown with a dramatic train, whereas her groom dazzled in a three-piece suit.

After the ceremony, the reception was a star-studded event attended by celebrities like Zac Posen, Debra Messing, and Mariska Hargitay.

Domino’s husband, Penn Badgely, is best known for his portrayal of Dan Humphrey on the CW hit show, Gossip Girl (2007-2012). Later, he also gained huge acclamation for his role as Joe Goldberg in Netflix’s You (2018-2021).

Moreover, just like his wife, he is also the lead singer of the indie band, MOTHXR.

Before Dominico, Penn was in a relationship with his Gossip Girl co-star Blake Lively and Zoe Kravits at different points of time.

Domino and her husband, Penn Badgely, are expecting their first child together.

In the same post, Domino revealed that the good news came after two miscarriages. After losing two unborn children in her womb, Domino had given up all hope. But the good news finally came to her.

Apart from her unborn baby with Penn, Domino is already a mother to her son, Cassius Riley (born in 2009), from her previous relationship.

Domino was born Domino Suzy Kirke in 1987 in London, England.

Her parents are Simon Kirke- drummer for the bands, Free and Bad Company, and Lorraine Kirke- a vintage boutique owner. She was raised alongside her sisters, Lola Kirke and Jemima Kirke.

More On Domino's Sister Lola:- Lola Kirke Is Dating! Her Affair With Boyfriend is Melting Hearts

Domino’s interest in music was because of her father, who trained her from a very young age.