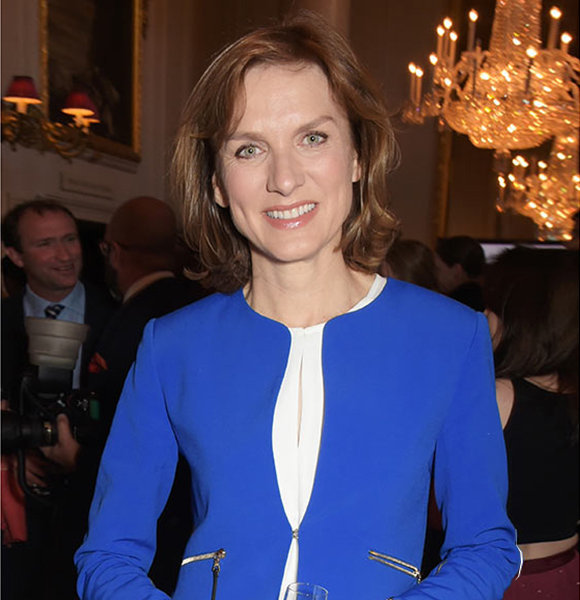 English television journalist Fiona Bruce is the name, who has mapped both popularity and longevity in the TV world, which is a rare sight in the journalism world.

Since joining BBC in 1989, she has never stopped on achieving the greater height of her career, which only few can dream of.

However, what hinders the first female newsreader of ‘BBC News at Ten' is her clash of professional and personal life. Also the loving wife and a responsible mother of two, Fiona Bruce has been lagging behind from being the ultimate professional due to her children.

In the battle between family and job, the newsreader has developed a deep-rooted guilt for her own reasons!

The daughter of English mother, Rosemary and a Scottish father John, Fiona found love while working in advertising in her early years. It was then she first met Nigel Sharrocks and eventually, the couple in love got married in July 1994 in Islington.

Since then the first female newsreader on the BBC News at Ten, Fiona has been blissfully married to her husband, Nigel Sharrocks for the last 24 years. The married couple also welcomed their first child, Sam on January 1998. They also gave birth to daughter Mia, in November 2001. But her work commitment became visible when the reporter returned to work on Crimewatch, just 16 days after Mia was born in 2001. Later, the work commitment grew into something bigger - one big regret.

The fact that she is a BBC presenter with an immense workload, she feels her motherhood is lagging behind. In order to make amends to this decision, The Singapore native still hires a nanny to her adolescent kids. In an interview given to Daily Mail in 2017, the BBC newsreader reveals,

"I know it must sound absurd, but we still have a nanny. I’m working a lot and my husband works a lot, too, and it’s really important for me that someone is in the house when Mia comes in from school."

For taking care of her children, she has a nanny on her side. Talking to Hello magazine in June 2018, she stated,

"We have had the same nanny for 20 years and that has made so much of my working life possible. But I do have a fair dose of working mother's guilt. Would it have been better for my children had I been at home all the time? I don't know. I've asked and they say no!"

As she opens up she feels "guilty" for being a working mother, she reflects her mother's sacrifice for her, contrary to her effort. Talking to Radio Times, she stated

"She stopped working when she had her first child and never went back. My parents' set-up was very traditional. I do judge my parenting skills against hers and often find myself falling short. She was always there, but I'm not."

For the presenter, her situation of her work commitments hampering her family life is one of the biggest challenges to overcome. And the woman, who once flew off to India to report on Bengal tiger, has lately limited herself as a studio presenter to fulfill her family responsibilities.

After all, balancing personal and professional life as Fiona has, is itself an immense task to succeed on!

The Crimewatch co-presenter almost chose an alternative career path as she joined a management consulting firm after leaving university. After finding her workplace ‘depressingly dull,’ she moved on and did a bit of advertising before getting her break in television on Newsnight as a researcher.

After the career change, Fiona gradually progressed through the ranks in BBC with one shows after the other. With a series of success as a television presenter, the 54-year-old star explored her talents in the field of writing.

She made her writing debut in 2010, where she wrote and presented a BBC documentary ‘Victoria: A Royal Love Story.’ Her inclining career path and never-ending dedication to her work have brought her enormous salary returns.

On July 2017, BBC disclosed the salaries of their stars after Governmental pressure, which revealed Fiona’s earnings to be in between £350,000 and £400,000, ranking her in the third position on the list of highest paid woman presenters of BBC.

For the successful reporter, who currently enjoys a net worth of $3 million, at the age of 54 has written success in her earnings too!