Gina Carano Left "Man Of Steel" Boyfriend, For Whom? Husband Not Or Casually Dating?

By LRU Writer | On: March 10, 2021
American actress, Gina Carano is the former Muay Thai Wrestler with an impressive outcome of only one loss which made her the first American woman to win a title in Thailand. Because of her skills in martial arts, she was crowned as “Top 10 Influential Women” of 2008 was ranked her in the 5th. And for her astonishing career in the sport, she credits her boyfriend, Kevin Ross for influencing her to be in the sport. However, the Texas native has a long list of dating history, which consists of on-and-off relationships for a long period of time. 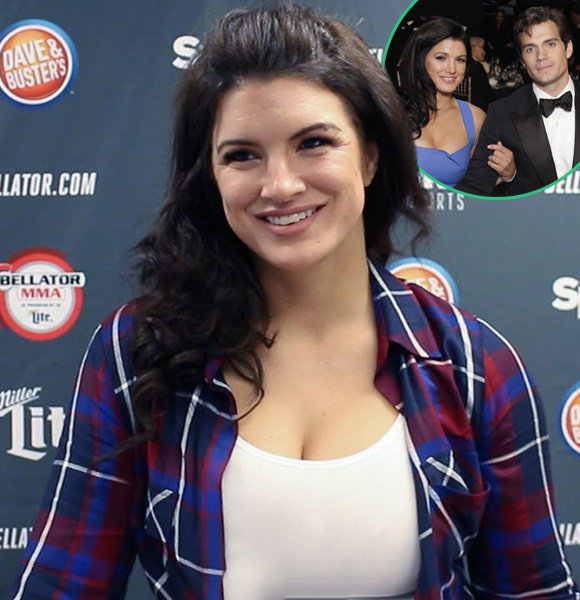 American actress Gina Carano hit the headlines when news swirled that she had sparked love with Hollywood's Superman Henry Cavill. But they could not hold on to their relationship even after giving love a second chance.

What's surprising is, the actress has once again rekindled romance but not with the 'Man of Steels.' However, the now loved-up couples is no new to each other; They know each other very well and have been friends for a decade.

Read down below to find out who that person is and get to know if the former MMA star calls him her husband.

Former MMA star Gina Carano shared a romantic chapter with The Man Of Steel actor Henry Cavill in September 2012, after his engagement ended with his fiancee Ellen Whitaker.

The Wrestler-turned-actress attended several film awards with her British boyfriend, which includes Vanity Fair Oscar Party. The witnesses also tagged the couple as a harmonious couple.

Despite such a bond, the "harmonious couple" could not last long as they called their relationship off in May 2013. Soon after the news aired, Henry had already moved on with the Big Bang Theory actress Kaley Cuoco but the relationship ended as quickly as it had fired up.

Later, in October 2013, Gina and Henry rekindled their romance as the Superman actor was spotted dining with her in Rome, Italy.

They had maintained a low-key life until they hit the headline with the adoption of a dog from the Big Bear Akitas.

The family breeders posted the picture of the pair with their pet, writing:

"We are proud to announce the newest members of the Big Bear family! Henry Cavill (Man of Steel) and Gina Carano(Fast and Furious 6) are the proud owners of a Big Bear Akita."

Seeing a smooth run in their relationship, fans wanted the couple to announce each other husband and wife, but they called off the relationship once again in December 2014.

After ending her relationship with Hollywood's Superman, Gina remained single for almost a year.

Then it was in 2015 her heart started beating for her ex-boyfriend Kevin Ross; And in June, the fourteenth anniversary of their first meeting, the couple got back together.

She revealed their reconciliation by posting pictures on her social media handle. The movie star shared a snap of locking the lips with her kickboxer Kevin Ross in 2015.

See Also:- Mandy Rose is Not Expecting a Wedding! Got Engaged to Boyfriend, but it Went Off? "For those of you that don't know we dated for 4 years, were broken up for a decade then got back together on the 14th anniversary of the day we met."

"Gina is not only the reason I'm even doing what I am but literally the reason that I'm even alive and walking around still. You are my inspiration, my best friend, my everything!!!"

Previously, Gina and her now-boyfriend were together back in the 2000s. They dated for four years, calling it quit in 2004. Then, they remained friends for almost a decade and got back together as boyfriend-girlfriend.

Well, with their reconciled relationship, it seems the couple is ready to take their relationship a step further. And the fans once again are hoping that they soon call each other husband-wife.