By LRU Writer | On: May 23, 2019
Heather Locklear was an omnipresent entity on the network television... The Spin City actress - who identifies as belonging to the Caucasian ethnicity... At age 57, the mother of one - who boasts the height & weight of... She still possesses the ability to seduce men, who would give their world to sweep her off her feet... Heather does manage to make a comeback, perhaps, her over-the-top hairstyles and dresses... 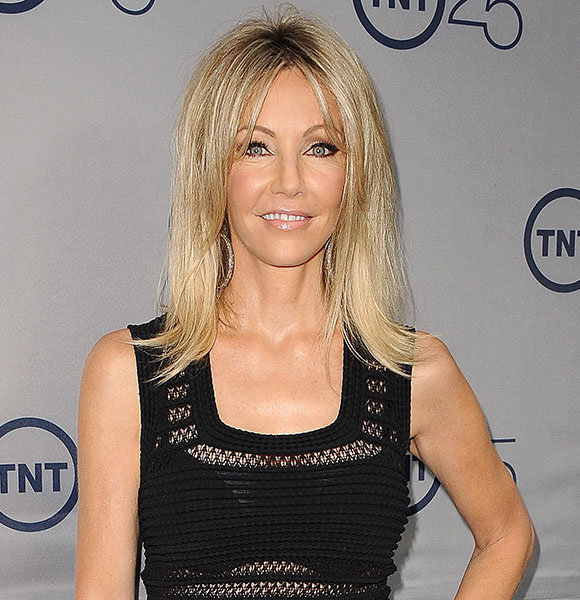 During her heyday in the mid-'80s and then the early-'90s, the name Heather Locklear was an omnipresent entity on the network television. In addition to dazzling the TV audiences with mesmerizing hairstyles and iconic dresses, she also portrayed equally classic characters in series such as Melrose Place, Spin City, and T.J. Hooker.

Now way past her prime, Heather's fall from grace is as sad as it is pitiful. Since her slump, the only way she ever makes headlines is because of her run-ins with law enforcement.

Drug addiction, coupled with alcoholism, meant that she would never be able to retain a lover for an extended period. The latest people to be at the receiving end of her relentless rage are none other than her parents.

Read along to learn about the family drama and more including her age, ethnicity, height, weight, feet, hairstyles & dresses!

Heather's trouble with the law dates as far back as 2008.

A year after her divorce with husband of 13 years, Richie Sambora, she got arrested for driving under the influence. Two years later, while dating actor Jack Wagner, the Melrose Place star caught a misdemeanor charge following a hit & run incident.

Following her separation from Jack in 2012, she served a lengthy stint in a hospital after reportedly mixing alcohol and prescription medication. For the next six years, she laid low until she got arrested for kicking police officers, who were responding to possible domestic violence in February 2018. A mugshot of Heather Locklear following her arrest on 24th February 2018 (Photo:- mercurynews.com)

However, the gravest allegations against her came forth on 18th June 2018 when her parents - father William Robert Locklear, an administrator at University of California & mother Diane Tinsley, a production executive at Disney - accused her of attacking them.

An insider told TMZ that Heather's parents visited her residence in Thousand Oaks after she suffered an episode, only to get attacked. The insider claimed that the Spin City actress - who identifies as belonging to the Caucasian ethnicity - “got violent, choking her mother and hitting her father."

The incident, however, didn't get registered as a criminal matter but as a medical issue because she tried to shoot herself. After being released from the hospital, Heather got arrested once again for attacking police officers, who responded to a disturbance call.

Since the arrest, the T.J. Hooker star is trying to push her life back on the right track, but to no avail. Despite her best intentions, her multitude of stays at rehab facility has either ended on her running away or falling back on the vicious circle of addiction.

Heather's propensity to flare up issues with her muses never helped her cause. Back in January 2019, while embarking on an out-patient rehab at home, she broke things off with then-boyfriend of more than two and a half years, Chris Heisser.

Under the care of her parents, the former Dynasty actress made remarkable progress. But then - following a bust-up with Chris in late-April that year - she returned to rehab, seeking help.

When the news hit a month later, a source came forward with startling revelations. Per the insider, Heather "has been to rehab more than 20 times, perhaps 25 times.”

Also, her addiction continues to take a toll on her daughter Ava and her ex-husband, Richie. To her credit, the Los Angeles California-native holds herself - and not them - accountable for her problems.

Her family - including her siblings Mark, Laurie & Collen - amid setback, continue to rally behind her. For them, Heather can resurrect her dying acting career if she overcomes her demons.

And why not? At age 57, the mother of Ava Elizabeth Sambora, Heather - who boasts the height & weight of 5 feet & 5 inches (1.65 cm) and 123.5 pounds respectively - still possesses the ability to seduce men, who would give their world to sweep her off the feet.

Of all the things to look forward to when Heather does manage to make a comeback, perhaps, her over-the-top hairstyles and dresses will make the most noise.