By LRU Writer | On: August 20, 2019
Joy Taylor had first met her ex-husband at a...As of today, she is engaged to her boyfriend...VJ currently relishes a net worth of... trying to secure her wealth in wise investments... 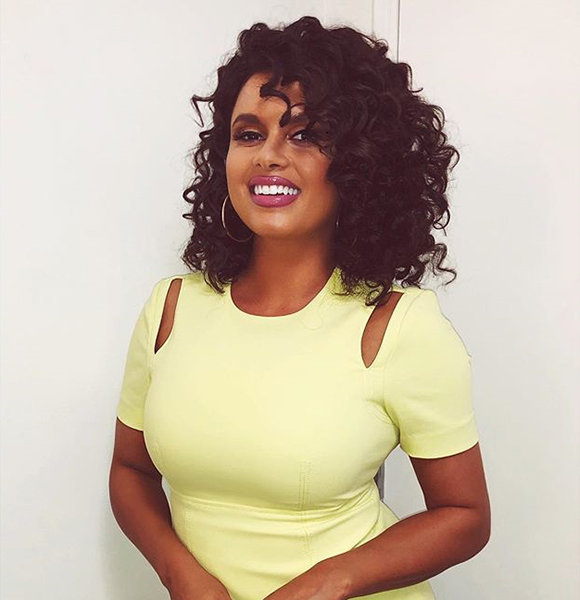 As a radio jockey, Joy is well known for hosting the radio program The Ticket Morning Show. Also, she is a presenter of shows like Thursday Night Live and Fantasy Football Today on CBSSports.

Joy (full name Joy Allison Taylor) was born on 17th January 1987 in the town of Pittsburgh, Pennsylvania. She possesses an African-American ethnicity.

Interestingly, her mother Georgia Taylor and elder brother Jason Taylor played a crucial part in her upbringing. No wonder, she stays vocal about the support she receives from her family and siblings.

But, the presenter has discarded citing her father's name or involvement in her life. Many speculate if her family members are not in good terms with her father. On top of that, during father’s day in 2012, she tweeted that her brother Jason has been a father figure throughout her life.

The 32-year-old host’s brother Jason Taylor is an established former football player. He mostly played for the Miami Dolphins team in NFL and is even inducted in the Pro Football Hall of Fame.

Apart from Jason, she has two older sisters, two younger sisters, a younger brother, and an older brother.

The sports broadcaster was previously in a married relationship.

She had tied the wedding knots with Richard Giannotti, President of Athlete Asset Management. She had first met her ex-husband at a conference and dated him for a few years before marrying him on 13th February 2016.

But, her marriage to Richard fleeted after a year as she divorced him.

Nevertheless, she moved on and got engaged to her boyfriend Earl Watson, former NBA player and fired coach of Pheonix Stars team. Joy and her partner surprised their fans by announcing their engagement in September 2018 through their Insta handle. They didn’t disclose the venue of their engagement, but a beautiful diamond ring on Joy's finger spoke in volumes.

Joy's fiance is no stranger to failed marriage; he was in a marital relationship with ex-wife Jeniffer Freeman.

The VJ currently relishes a net worth of $1 million, and it seems she is trying to secure her wealth in wise investments. In the start of 2019, the radio host and her fiance bought a new build house in San Fernando Valley.

Their freshly purchased contemporary styled home covers about has about 5,000 square feet of living space and was bought for $2.75 million. It’s still not known if her fiance had solely paid the amount all by himself during the purchase or not.

Talking about Joy's body facts, Joy's height is 5 feet and 2 inches(1.57 meters) while her weight is 59 kilograms.

Her well-maintained body measures in about 37-27-38 Inches while her beautiful black eyes and hair compliment her stature.