By LRU Writer | On: October 29, 2018
American actor Lucas Jade Zumann hails from the artistic family, and since the young age, he has been familiar with the entertainment world.After battling against his girlfriend during childhood, Lucas finally confessed his feelings to....... They have always been there and witnessed of blooming into the teenager. 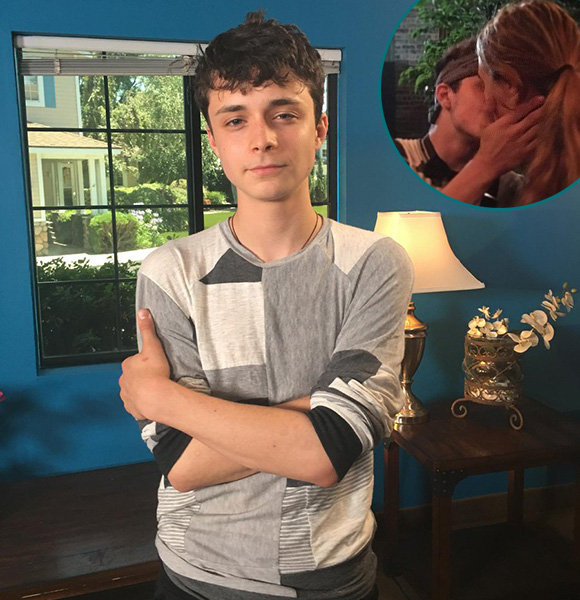 For American actor Lucas Jade Zumann's acting talents, there might be no question his abilities; if so any his works on Netflix series, Anne with an E and indie comedy-drama film, 20th Century Women are enough to prove his acting abilities.

Thanks to his artistic family, the actor has been familiar with the entertainment world since his young age.

And to all his curious fans, the Sinister 2 star has added a treat by embraced into the romantic journey with his childhood friend. Taking his time, the 17 age actor has finally opened about his dating life wideout all to his fans and followers

The Every Day star, Lucas Jade Zumann has been sharing a one of a kind dating life with his girlfriend!

The duo has always been there and later, when his girlfriend, Shannon Sullivan confessed her feelings first, the Anne with an E star started dating Sullivan. Together, they promised to get old together and also had planned their future together.

See Also:- Ava Sangster's Family: Happy Life with her Parents and Siblings, But What About her Boyfriend?

But Lucas' fans started pondering with the volcanic eruption after he Instagrammed the cozied picture with his girlfriend where the couple was locking lips captioning he is missing her already. Well, after the couple started publicly romancing and flaunting their relationship, they keep on ruling the social media with their picture.

You May Also Like:- "Blue Bloods" Child Actor Tony Terraciano Loves to Play Lacrosse. What's He Been Doing Lately?

Though they short on the social media after he posted the cozied picture, Shannon also posted the adorable picture with her boyfriend on Instagram on 2 September 2018 captioning their album would be on the market soon. His girlfriend teaches Spanish via her YouTube video whereas Lucas' worked in a Spanish restaurant. Shannon is fluent in speaking, and Lucas understands well more than he speaks.

It seems the couple went to the same school as Lucas as claimed in the video that, we "learned Spanish in School."

During the Q & A session, their followers asked the many interesting questions which made them a force to shed light on their dating life.

When one asked the pair about their reaction after they went public with their dating life for the first time, Lucas stated that he should have never posted on his social media.

But the secrets on the Dating Life of the popular star can't be hidden for the longer period!

However, they did not disclose the actual date of their meeting as they seemed to be unknown about that. They knew each other since they were very young.

During their first year of high school, due to the hectic working schedule of Lucas, they were not together. She used to miss him a lot and the visualizing his image; his messages made her more difficult. As she knew she was going to see him for a long time, she deactivated her Instagram,

Since they seemed happy together, they have also planned their future together and expressed their desire to travel the world together. Also, she disclosed that if the couple gets time, they will visit Spain this summer.

Don't Miss:- Logan Moreau Wiki: Everything There is to Know! From Age to His Career Status Now

The Chicago native has an artistic blood ruling over his vein. Born as the eldest among four siblings, his mother was a musical theatre artist, and father is a musician.

He thinks that performance was in his vein and his supportive parents never forced him to enter into the acting industry. During his high-school, he got the greatest break into his career in 2016 by appearing into the movie, 20th century Mother, where he showed his charismatic skills.

While he was climbing to be the star, on the other hand, he was struggling to complete his study. For the certain time being, he was home-schooling but later on, he went to his school and attended the class.

Well, he made his very first debut with the 2015 'sBlumhouse Production Sinister 2, and as of now, he is dominating the entertainment world with his charming nature and knife-like sharped skills.

But he is not going to pursue the acting career for the fulltime, and he realizes that it would not turn his good fortune. But as an actor, he earns the average salary of $50,529 per year.  So, he might have piled up the good net worth with the undisclosed salary.