By LRU Writer | On: November 13, 2019
Mia Goth and her boyfriend with a dark suit...first started out as a model at the age of .....she has acted in critically acclaimed movies like...got married to actor...rumored to be their official legal wedding...now dating...proclaims a net worth of... 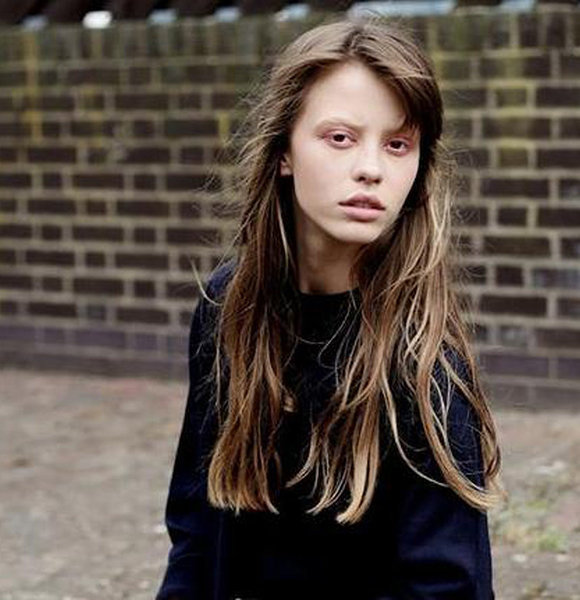 Mia Goth has become a well-known face in arthouse cinema ever since her debut in the movie, Nymphomaniac. During her acting career, she has worked with some high profile actors including Uma Thurman, Jake Gyllenhaal, and Tilda Swinton.

In 2015, the actress got nominated in the category of ‘Most Promising Newcomer’ at the British Independent Film Award. Apart from her acting, Mia is also adored for her innocent look and thin eyebrows.

Mia was born as Mia Gypsy Mello da Silva Goth on 30th November 1993 in London, England. The actress comes from a very artistic family background, and upbringing as many of her predecessors are artists.

Her maternal grandfather is a multi-talented American artist (filmmaker, musician, filmmaker); whereas, her grandmother Maria Gladys is a prominent actress from Brazil.

However, her parents didn’t choose to pursue a career with an artistic endeavor. Her father works as an ice trucker and is originally from Nova Scotia, while her mother is from Brazil and works as a waitress.

The artist mostly relocated from one country to another as her parents stayed separately. But at the age of 12, she finally settled with her mother in South East London.

The actress was married to controversial actor Shia LaBeouf until 2018. She met him in 2012 while they were shooting the movie, Nymphomaniac: II, and started dating the same year.

After a few years of dating, she secretly got engaged to the actor, who had proposed her with a large diamond ring. In 2016, they performed a commitment ceremony at a chapel in Las Vegas, which was rumored to be their official legal wedding.

Since the model was seen dressed in a lace wedding dress and her boyfriend in a dark suit, the gossips were justifiable.

However, they did get legally married later and were very transparent about the relationship in public.

Unfortunately, in the summer of 2018, Mia filed for divorce, and the settlement was kept very private. Although the real reason behind their seperation hasn't surfaced in media, there is a probability that the differences arose from her ex’s change in heart for another girl. A few days after the split, Mia's ex-husband Shia started dating singer FKA twigs. But, his newfound love was shortlived and lasted only nine months.

Coincidentally, FKA is the ex of Mia’s co-star Robert Pattinson from the movie, High Life. So, while Mia and Robert were busy acting, their exes were actively dating one another.

Mia - whose beauty is intensified by her height of 5 feet and 7 inches (1.71 meters) - first started as a model at the age of 14. She was offered the job after a fashion photographer discovered her photogenic personality.

Eventually, she worked under contract for the Storm Model Management agency and even posed for famous brands like Vogue and Miu Miu.

Afterward, Mia found passion in acting after making her first television appearance through the TV show, The Tunnel. But her big break came after she was chosen for the controversial arthouse movie, Nymphomaniac: Vol. II.

Until now, she has acted in critically acclaimed movies like High Life, Suspiria and is doing well financially. She was also involved in the promotion of Prada’s perfume line, La Femme Prada Intense.

Since the actress is still not a household name in the industry, she earns only about $50,000 yearly. However, she could have pushed her net worth to a few million from her divorce to Shia LaBeouf, who is worth a staggering $25 million.