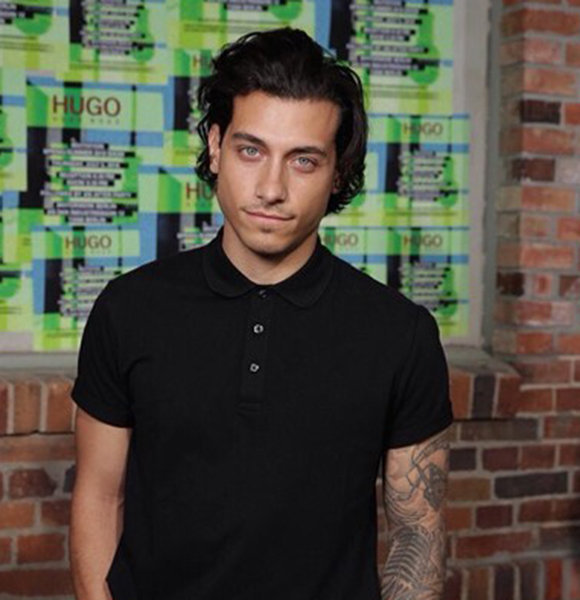 It rarely happens that a person wants to become a musician and ends up being an actor. Fortunately, Rob Raco is amongst the few whose life imitates the same story.

With his growing fame, he has been involved in many rumors about being gay.

Are the rumors true? How did he get involved?

Keep scrolling to find your answer.

Rob's fans can breathe with relief knowing that he is not gay. However, he flipped many people with his gay romance in the hit TV series Riverdale.

Rob got a lot of attention with his gay character in Riverdale. His fans nearly thought he was gay because of how well he performed in the series.

However, in an interview with TV Source Magazine, he cleared all rumors. He said,

Being a heterosexual man myself, portraying Joaquin as confident with his sexuality as I am with mine has been incredible. It’s inspirational to me. It’s fearless.

Rob has also been linked to many girls, which is strong evidence that he is not gay. Although there are few details regarding their relationship, Rob and his girlfriend, Ruby, have been seen leaving lovely comments on each other's Instagram posts. Their fans are curious about their relationship based on the comments they have on each other's posts. However, both of them have been silent about their love life.

Before dating Ruby, Rob was also said to be dating Ella Purnell. According to sources, Rob and his supposed partner, Ella were dating in March 2019. However, Ella was in a relationship with James Coate in 2018 and is currently dating Max Bennett Kelly. Therefore, it is unclear if Rob and Ella were dating or not since none of them has confirmed their dating rumors.

Regardless of his rumors, he has been doing great in his career.

Rob Raco was born to John, a civil engineer and drum builder, and Linda, a visual artist, and teacher in Windsor, Canada. The drummer is the youngest in the family of four, with an elder sister named Argelia.

As a teenager, the 32-year-old was meticulous with the drum stick in his hand. He could drum for hours and never get tired of it.

Recommended: Jordan Calloway Still In Search of a Girlfriend?

Passionate about music, Rob found a love for drumming from a very tender age. He also traveled to various places, recording and performing songs with different Canadian music groups. Then, however, things took a turn for the good in Rob's life. The actor, who stands at the height of 5 feet 9 inches (1.75m), moved to Los Angeles to become a professional musician but was inclined to act instead. During his time in Los Angeles, the drummer trained with the legendary acting guru Eric Morris.

Much to his surprise, what looked like a fluke landed him a role in the 2014 TV series, My Crazy Love. Now, he is a renowned face in the acting industry.

Even though he started late in the acting business, the Throb star has already made a significant contribution to the industry, with 20 acting credits to his name.

Though his salary numbers suggest the actor's average salary of $49,923, there is more to it. He is a specialist in drumming with a custom drum manufacturing company Essex Country Drums and an established actor with recurring opportunities in various movies.

Considering all these ventures, Rob has accumulated decent net worth. However, he has not revealed the details about his net worth.

In the coming days, we wish to see Rob talking more openly about his relationship with his girlfriend.

Stay tuned to get more updates on Rob Raco.