By LRU Writer | On: July 26, 2019
Trippie Redd sharing intimate kisses with girlfriend...car accident and the responsibility to look after his family...singer has already accumulated a praiseworthy net worth of... 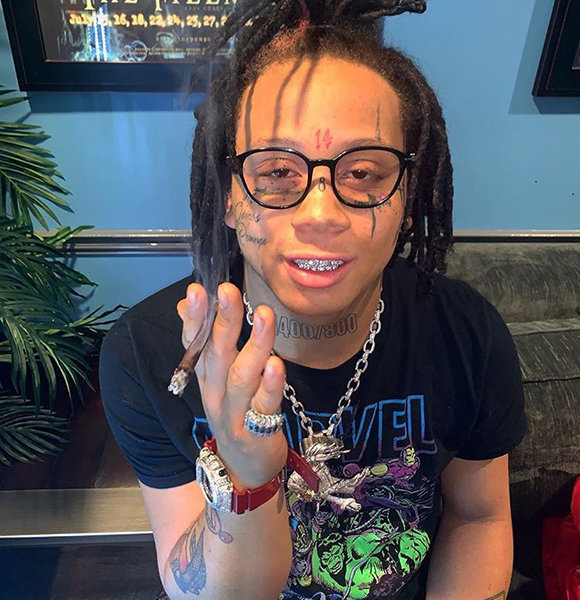 Trippie Redd established himself as a chart-topping artist through hits like Love Scars & Dark Dummo. His debut album Life’s a Trip secured the fourth position on Billboard upon its release, although critics panned it.

He became a notorious celebrity by making headlines through his feuds with artist such as 6ix9ine and XXXTentacion. The disputes intensified and created a massive buzz among viewers.

However, the singer later got in good terms with them. He collaborated with XXXTentacion and artists such as Travis Scott, Diplo, and Young Thug.

In 2017, the artist was dating Latina Instagram model Mulan Vuitton, but their relationship was very shortlived.

Allegedly, he broke off with her due to her affair with another man. Later in 2018, the artist started dating female rapper Aylek$. He confirmed their relationship through a post on Instagram in April that year.

He had first come across her through his Instagram handle and got attracted towards her in the first sight. Trippie made the first move and DMed her on Instagram. As their online conversation increased, the two decided to meet up at a place in New York.

During their dating period, Trippie and his girlfriend were very candid about their love life in the media. The rapper spent lavishly for his girlfriend and even gifted her a branded bag worth $5000.

Unfortunately though, after the release of his girlfriend's single titled No Feels, there were rumors that the pair had broken up. As the contents of the lyrics hinted towards the breakup, many speculated the split.

Also, Aylek$ called out Trippie as a fake artist in an interview. However, he didn’t give any response to her brutal comments.

Then after, on 26th March 2019, their break up was confirmed; DJ Akademiks shared an intimate video, featuring Trippie's new girlfriend. In the clip, viewers could see him sharing intimate kisses with girlfriend Coi Larey. Interestingly, his girlfriend is also a hip-hop artist with viral singles like Pac Girl to her credit. The pair are in talks to collaborate on a new album.

Trippie - height: 5 feet is 6 inches (1.6 meters) - was born on 18th June 1999 in Canton, Ohio. He grew up in a struggling household as his father got imprisoned while he was a child. As a result, his mother struggled to raise him and his brother by herself.

But, the adversities didn’t end there; his elder brother lost his life at a car accident, and the responsibility to look after his family fell upon his shoulder. Well, Trippie's passion for music and success in the field raised his living standard.

As of 2019, the 20-year-old singer has already accumulated a praiseworthy net worth of $6 million. Furthermore, he will be touring with artists such as Wu-Tang Clan & A$AP Rocky at Rolling Loud event in New York.