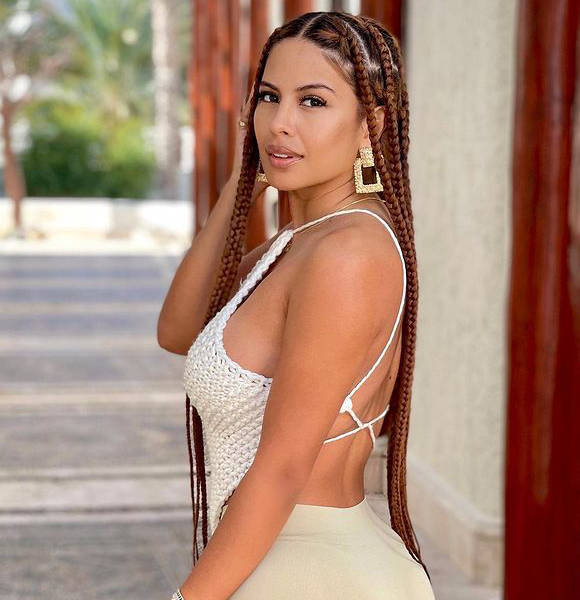 But one thing that she has done with poise is that she has learned to adapt and grow out of life’s hardships.

Now she has moved on from her ex-husband, making her a happy girlfriend and a proud mother; however, it took some journey to reach the current space. Follow the article to know about the relationship history of the Star Lash Extensions founder.

Love was inevitable for Yris Palmer when she met English soccer player and former husband, Staforde Palmer, in 2011. The latter already had a son from a previous relationship.

After their first meet in Las Vegas, the couple shortly started dating and eventually got engaged. While the fiancee and soon-to-be husband Staforde had to live in the United Kingdom for his work, Yris stayed back in the United States. But the pair tried their best to grow their romance whenever they met.

Even the half-world distant relationship couldn’t weaken their bond. Instead, they prospered their relationship into a much more meaningful and stronger union.

After dating each other for five years, Yris and her husband Staforde decided to get married.

They held their auspicious wedding in November 2016 at Castaway Restaurant in Burbank, California, Yris was super lucky to have exchanged the vows in her hometown that she adored with her heart.

Since May 2015, her former husband, Staforde, has worked with Display Innovations as a sales agent. In February 2016, he also joined SEV Laser Aesthetics as a partner. He would later play soccer in the country for the likes of Orange Country.

Previously in the United Kingdom, he had played for the teams such as Hayes & Yeading and Northwood  FC.

In her Youtube video titled “Answering Your IG Questions,” she shared, “I was a little shocked because I didn’t think I would get pregnant that soon, but when I found out it was a girl, I was over the moon."

"My pregnancy with Ayla the first five months was rough. I was throwing up all day every day, anything...I couldn't even taste the water. I would literally throw up all day and then I would have to go get IV so like hydrate me like it was so bad. Then one day on my fifth month I woke up and it was gone. Then it was cool and then my delivery was a little rough. It was 36 hours in labor. I definitely got the epidural," she remembered.

In another video, titled “Becoming A Mom | Storytime,” she shared that she found it hard to balance her life as a working mother.

After Alya was born, Palmer went through a weight loss of around 15 pounds because of morning sickness in the first few months; she stated:

But it was the sense of motherhood she experienced that helped her overcome the “mom’s guilt” she felt.

“I’m hustling and I’m doing all of this for her and I hope one day she looks back and she’s like, ‘I want to be just like my mom.’ It makes me emotional because I feel like that is one of my goals in life…to make sure my daughter looks up to me,” she expressed.

That’s the reason why neither Yris nor her former husband and baby daddy Starforde has publicly shed light on the reason behind their divorce. Still, we could speculate that the culprit might have been each of their busy careers.

When they decided to step up their relationship, the half-world distance couldn’t stop them from gluing their bond through marriage. They visited each other in the states and the United Kingdom for five years before tying up the knot.

But after a year of getting married, the pair’s daughter was born, and they faced a hard time balancing each other career and their own responsibilities towards their daughter.

Yris, who finds it hard to move away from the Los Angeles culture, has spoken about the period and how it was tough for her to raise a child as a working mom.

In the same video, “Answering Your IG questions, in 2020, Yris confirmed that he and her ex-husband Staforde had already separated.

She added, “we have a beautiful co-parent relationship and we do a lot of stuff together as a family for Ayla.” The pair were seen teamed up to drop their daughter on her first day of school in 2019.

Who Is Yris's Current Boyfriend?

As love always has a way of finding you, Yris is no exception. She is head over heels for her new boyfriend Troy Daniels, a professional Basketball player for Denver Nuggets.

Troy and Yris met when Troy was playing for the Lakers. They made their acquaintance through their mutual friends Anastasia Karanikalaou, who is also a bestie to makeup mogul Kylie Jenner and Troy’s basketball mate Kyle Kuzma.

The amazing couple couldn’t resist but fell in love shortly after their few dates.

During the YouTube Q&A session “Meet My Boyfriend,” the 30-year-old athlete elucidated his girlfriend Yris as “beautiful, stubborn and loving” who came across as a “sorted” person in her life.

Troy couldn't answer when asked about what Yris did for their first date; however, she gave him the benefit of the doubt considering Delilah restaurant’s dark lighting in LA with the wine they had quaffed.

Unlike Troy, we recall her beautiful blue full bodysuit with a hair-straight-down look because Yris took her to look to her Instagram handle, captioning it as “Bae night.”

Living Together During Lockdown

The duo lived together during the 2020 quarantine. Being together 24/7, the couple got a chance to comprehend one another better.

Troy could answer most of the questions asked about Yris in her “Meet my boyfriend | Q&A” session post lockdown. Troy could tell Yris’s dream job, which was to be an actress before Star Lash. He answered it right, saying Jennifer Lopez was Yris’s celebrity girl crush.

Green Signal From Their Family?

During the session, the couple also disclosed that Ayla, Yris’s daughter from her previous marriage, finally approved her mother’s new boyfriend, Troy.

“She calls him Troy-Troy, the cutest thing,” said Yris.

Troy acknowledged that his own daughter Amiah Daniels from his previous romantic involvement made him comfortable being around kids. To that, Yris added,

“When you date people that have kids that they understand you do it better, they’re probably gonna care more about your kid, your situation, you know like a single person they’re not just gonna they’re not gonna relate to you as well and if they do it that’s amazing.”

He also shared that his mother admired his partner, and they frequently talked to her over the phone. In fact, Troy’s mother used to send recipes to Yris during the lockdown.

With the happy and flourishing relationship with a son on the way, do we sense a husband and wife in the making with wedding bells heard soon? We never know.

And until then stay with us for more updates on Yris Palmer!