By LRU Writer | On: December 31, 2018
A tragedy followed by a joyous moment! Standup comedian-cum-actor Rob Delaney, age 41, revealed that he and his wife, Leah Delaney welcomed their fourth child in August 2018 in an interview with The Sunday Times Magazine, which got published on 30 December 2018. 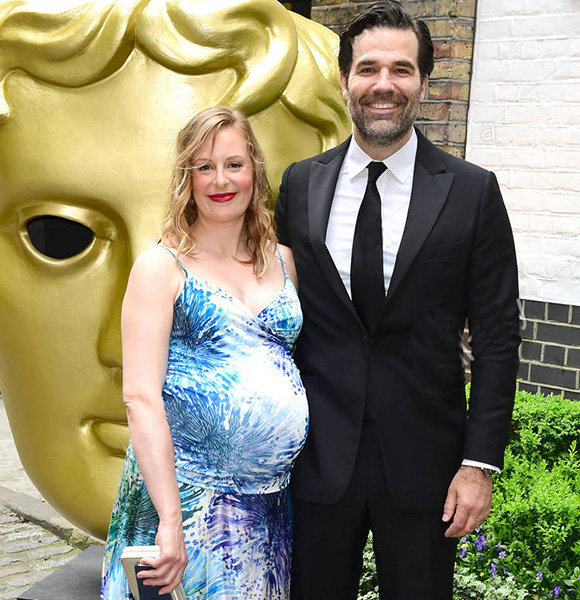 A tragedy followed by a joyous moment!

Stand-up comedian-cum-actor Rob Delaney, age 41, revealed that he and his wife, Leah Delaney welcomed their fourth child in August 2018 in a most recent interview with The Sunday Times Magazine on 30th December 2018.

This exuberant news of the married duo, who got tied the knot in an intimate wedding ceremony 14 years ago, welcoming the newest addition to their family comes less than a year after announcing the tragic death of their 2-year-old son, Henry due to cancer. Rob took to his Facebook page and wrote:-

"Henry had been diagnosed with a brain tumor in 2016, shortly after his first birthday, following persistent vomiting and weight loss. He had surgery to remove the tumor and further treatment through the early part of 2017. Then cancer returned last autumn and he died in January."

Delving further into the tragedy, the Boston native opened up about how his family got robbed of joy from their lives forever. He quipped:-

“My wife and Henry’s older brothers and I are devastated of course. Henry was a joy. He was smart, funny, and mischievous and we had so many wonderful adventures together, particularly after he’d moved home following 15 months living in hospitals.”

Despite never meeting each other, their fourth child shares a special bond with his deceased brother. After all, Henry was the first to know about him when Leah got pregnant.

For Rob and his wife, Leah, the idea of having a new baby following Henry’s death was all but “mixed feelings.” The father of four children told The Sunday Times Magazine:-

“We likely would’ve had a fourth anyway. But I mean, there’s mixed feelings.”

He then followed up by explaining how despite sharing the womb, their newborn and his dead brother carry different weight in his and his wife’s lives.

“It’s sort of like they touch each other a little bit, but they almost exist in separate lanes. Having another child in no way, shape or form eases the grief of Henry dying. But also having Henry dying doesn’t make our new son any less magical. I want to gobble him up and he deserves our full attention and love, and he grew in the same womb as Henry."

Three months earlier, the Deadpool 2 actor had penned a heart-wrenching essay chronicling Henry’s death and all the hospital stay-ins leading up to it. At one point, he quipped:-

"A regular baby's smile is wonderful enough. When a sick baby with partial facial paralysis smiles, it's golden. Especially if it's my baby."

By Rob’s admission, their third child had died at home, surrounded by the family in a comfortable surrounding. Speaking on the very matter, he told The Sunday Times Magazine:-

"It was just us, and it was really special." On 26 December 2018(Christmas Day), the Life After Beth actor sent out a couple of tweets briefing the Delany family’s holiday without Henry. He opened up his first tweet in a sorrowful tone by writing:-

Immediately following up on the equally melancholy manner by stating:-

"The day itself was okay, maybe because there were so many horrible, painful days leading up to it; we must have hit our quota or something. We talked about him a lot & included his memory throughout the day."

As per his second tweet on America’s favorite holiday, Rob made claims of destigmatizing grief by speaking publicly about his dead son. Comedian In Our Vault:- Who Is Wild 'n Out's Rasika Mathur Boyfriend & What Is Her Ethnicity?

Thoughts and prayers for Delaney family amid difficult times!

Congratulations to Rob and his wife, Leah on the newest addition to their family!