By LRU Writer | On: September 24, 2019
Ant Anstead moved on from his divorce with his wife of 12 years... girlfriend also wrote that they should go on a “double date soon" in the... that the two were already planning to get married...making the buzz about getting engaged 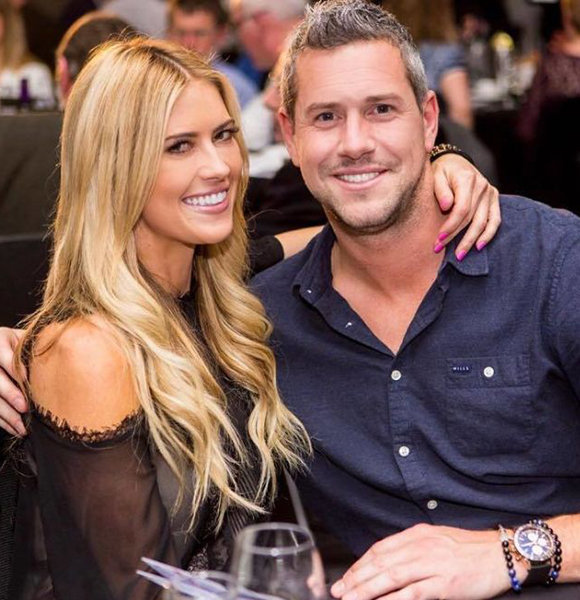 English Television presenter Anthony Richard Anstead moved on from his divorce with his wife of 12 years.

Best known for hosting Channel 4's motor show For the Love of Cars, Ant Anstead shares a strong bond with his second wife, though. Likewise, the English TV presenter also boasts a fantastic relationship with his spouse's children from her previous marriage.

Ant Anstead was previously married to his college sweetheart, Louise Anstead. The pair got engaged after dating for some time and tied the wedding knots in 2005 and became parents to two children; Amelie and Archie.

But despite sharing two children, the pair decided to split in July 2017, after 12 years of marriage. Ant even took the sad news to Twitter in October 2017, where he announced the split.

He tweeted exclaiming that he felt the need to let his friends and followers know about his separation news, adding he and Louis parted ways in July 2017. Mentioning his kids, he further wrote that the children remain their 100% priorities. Despite that, the Plymouth Devo-native didn't share the exact reason for his separation or anything regarding the children's guardian after the split.

Regardless of the divorce, Ant was openly dating and flaunting his relationship with his then-girlfriend on his social media accounts.

The motor specialist soon changed his dating track from his ex-wife to a new girlfriend, Christina El Moussa.

He started dating the beautiful 'Flip or Flop' star Christina El Moussa the same year he divorced his ex-wife. Ant and Christina had met through a mutual friend at the end of the year.

However, the pair was first speculated to be dating only on 1st January 2018, after Christina Instagrammed a picture with Ant during their cycle ride together. Ant's girlfriend also wrote that they should go on a “double date soon" in the comment section of the image.

Since the image, the pair began uploading pictures on social media time and again. Both the lovers could be seen spending quality time with one another, be it enjoying their trip to South Africa or spending their weekend in the Napa Valley, California.

The duo also got spotted with Christina's children, from her previous husband Tarek El Moussa in Anaheim on March 2018.

Similarly, Ant's then-girlfriend Christina also wished him a happy birthday on his 39th birthday sharing an Instagram image on 28th March 2018. In the caption, she also revealed that she was lucky to have him in her life.

She added that Ant is an "amazing dad" to her children too and quoted him as:- Later that year, it came to the limelight that the two were already planning to get married. One of the sources close to In Touch reported on April 2018 that the lovebirds were smitten in love and already talking about the marriage. The source stated:-

While Ant was still not officially divorced with his first wife, Ant and his then-new love interest started to swirl the wedding and getting engaged talks.

Since Wheelers Dealers host and his then-girlfriend was making the buzz about getting engaged earlier that month, they finally married!

The Wheelers Dealers host tied the knot with his girlfriend Christina El Moussa in a secret Winter Wonderland themed wedding held at their residence in Newport Beach, California, on 22nd December 2018.

Only 70 close friends and family attended their weddings. Interestingly, the newly married couple invited the guests to view the Newport Beach Christmas Boat Parade and later the guest found out that, boat parade was a bait to call them on their wedding.

Also, Ant and Christina's children from the previous relationship attended the wedding ceremony. The newly married couple explained that the wedding was all about their kids and called them a blended family.

"We wanted to make it about the kids. It’s the six of us. We’re a blended family so it was really important for them to be a part of it.” Soon after the wedding, the Flip or Flop star gushed that she was officially changing her last name, "El Moussa" to "Anstead."

Following the wedding, Ant and his wife with the rest of their family traveled to Bora Bora for a honeymoon. Both he and Christina extensively chronicled the trip on their respective social media.

Then in March 2019, the duo announced that they were expecting their first child - due in September 2019 - together. Sharing an image of her holding a sonogram, Christina revealed that their kids were happy about welcoming a sibling.

Within days of sharing the news of her being pregnant, the expecting mother opened up about her brutal first trimester via Instagram. Cassie Zebisch, Christina's publicist, confirmed the baby's gender as a boy in an interview with PEOPLE in April 2019. Ironically, it was Tarek El Moussa, who accidentally slipped the information while talking to TMZ.

Back in 2015, Ant's girlfriend-turned-wife revealed about her struggles with infertility issues. Before giving birth to her son Brynden, she suffered a miscarriage. As a result, his partner had announced about her scheduled c-section (use of surgery to deliver babies) due to challenging birthing experience in the past.

Thankfully, God seems to have blessed his new marriage with happiness this time without any conflicts. On the morning of 6th September 2019, the pair's baby boy Hudson London Anstead stepped into the world. Ant's wife shared the beautiful moment to her fans through her Insta handle while also disclosing her healthy newborn's measurement. She wrote,

Right after the arrival of his adorable son, his stepchildren Brayden (three-year-old) and Taylor (nine-year-old) joined the memorable occasion. It was apparent that his children couldn't wait to hold their baby brother in the arms with excitement gleaming over their faces.

His stepchildren are the product of his wife's marriage with ex-husband Tarek El Moussa. However. by the looks of it, the host is more than happy to have them in his life.