By LRU Writer | On: February 26, 2020
English singer Charlie Lenehan is the young singer representing one half of the popular pop-rap duo Bars and Melody. Before the young singer stormed huge attention from the series 8 of Britain's Got Talent, he first met his musical partner Leondre Devries via Facebook in 2013. But since impressing notoriously strict Britain's Got Talent judge Simon Cowell on the show back in 2014, Charlie has been the new talk of the town. 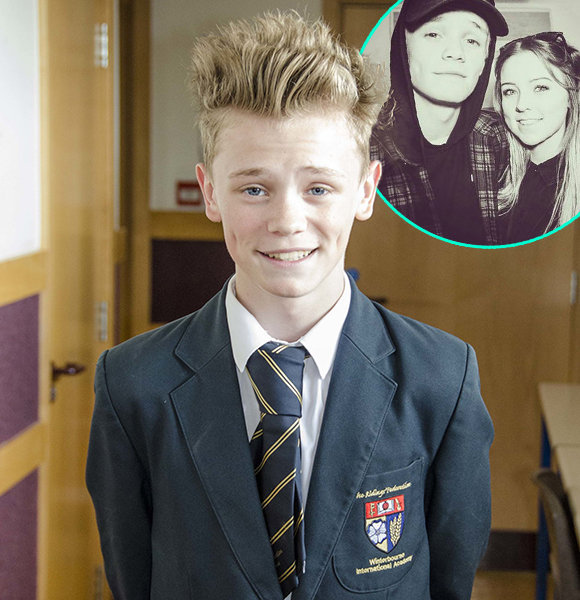 English singer Charlie Lenehan is the young singer representing one half of the popular pop-rap duo, Bars and Melody.

Before the young singer stormed huge attention from the series 8 of Britain's Got Talent, he first met his musical partner Leondre Devries via Facebook in 2013. But since impressing notoriously strict Britain's Got Talent judge Simon Cowell on the show back in 2014, Charlie has been the new talk of the town.

Similarly, Charlie's girlfriend has uploaded multiple of pictures from their dating life. She took to Instagram on February 2017 with Charlie quoting with several love messages. However, before coming out publicly about their relationship, the teenage lover broke up. They silently departed in 2017 keeping the reason inside their cupboard.

After the silent split from the Instagram star, Chloe Lindsay, the teen sensation started dating the musical artist, Ana Lisa in 2018. The pair has known each other for a long time for the singer was already featured on his girlfriend's Instagram before they came official with their romance.

Ana announced her relationship with the Bars And Melody's singer, Charlie on 29 July 2018 sharing the cozy pictures with Charlie along with the long caption which hints on their low-key romance. Since his social media star girlfriend came up with the news, he also flaunted the cozy pictures with his new hot girlfriend sharing the kiss, smiling and cuddling on 3 August 2018, writing: "I think I like her."

Well, it seems the young love bird is already in their serious mode with their newly blossomed romance. Also, the cozy pictures of Charlie with her new flame emerges like the rain of romance.

For one, Charlie has already started giving a cute nickname to his girlfriend; he shared an Instagram picture of him and Ana where he mentions that he is missing his lil chicken, where his lil chicken is giving a kiss on his cheek.

Born on 27 October 1998, Charlie Lenehan resides with his mother, an anti-bullying advocate and a cook mother, step-father, and two siblings named Brooke and Joel.

Early in his school Winterbourne International Academy, the Gloucestershire, England native had started singing, which his mother later discovered. When his mother attended the parent's evening at his school, his teacher informed her about his singing, asking whether she had ever heard her son singing.

Don't Miss:- American Journalist Emily Bazelon, A Rising Voice On Abortion and Bullying, Juggles Between Her Work and Personal Life

Since then, Charlie's mom has been supportive towards his singing passion. She also wished her Charlie's partner, Leondre on his birthday who is nothing less than Charlie's brother. Karin took to Twitter and wished the little man blissful birthday on his 15th birthday back on 6 October 2015. Well, with the support of their family, the duo is still climbing the trail of the success.

Charlie's musical journey started when he was a mere teen. But after meeting his partner Leondre in 2013 via Facebook, his career took a different flight. From this time onwards, their success and fame is inter-related and shared by both of them. Charlie represents the 'Melody' and Leondre represents the 'Rap' in the band.

Charlie along with his partner Leondre entered into the eighth series of Britain's Got Talent (BGT) where they performed a song of Twista and Faith Evans' Hope, replacing the original lyrics with their own verses protesting against bullying. Charlie and Leondre on their first audition in Britain's Got Talent in 2014 (Photo: Genius)

Their performance impressed the judge Simon Cowell that he pressed the golden buzzer, welcoming directly to the live semifinals. The boys cleared the semi-finals and placed the third position in the finals. The judge, Simon Cowell was so impressed that he signed the boys to a £500,000 record deal with his record label, Syco.

Related to Simon Cowell:- Eric Cowell Chemistry With Father Is Adorable; Meet The Next Simon Cowell

After that, Rap & Melody released their debut single Hopeful which was placed in No.5 on the UK Singles Chart, followed by their debut album ‘143’ in 2015 under the wings of Simon Cowell.

In addition to their musical career, they also sell a range of merchandise such as official B.A.M 's bags, mugs, hoodies, notepads, and T-shirts.

They are extremely popular on social media and has accumulated over 1.4 million followers on their B.A.M Youtube Channel. Along with their entrepreneurship, they are having a good earning from the Youtube also. They earn monthly estimated earnings ranging from $1.6K to $26.1K.

Well, with the passage of time, they have honed their talent and reached to the different height of success, and there is no doubt behind the high net worth that Charlie earns in the young age. But as a fact, he has not revealed the exact net worth in figure.

As of now, their popularity has emerged all over Europe and the band Bar and Melody are on their way to the European tour along with the pop singer Johny Orlando. The tour was supposed to start on 3 August 2018 with their first performance in Liverpool, UK and meant to end with their last performance at Warsaw, PL on 26 August 2018.

However, after a month, the band came with some changes to the tour regarding the venue, date, and addition of new singer. The band's official Instagram came with the announcement on 7 August 2018 that the tour is postponed to 18 August from Zurich, CH along with the Finnish pop singer, Isac Elliot.