By LRU Writer | On: September 11, 2019
Christina Anstead welcomed her baby boy into the world...what was a secret wedding ceremony conducted amongst close family and friends...Doing the same, Christina accumulated a net worth of 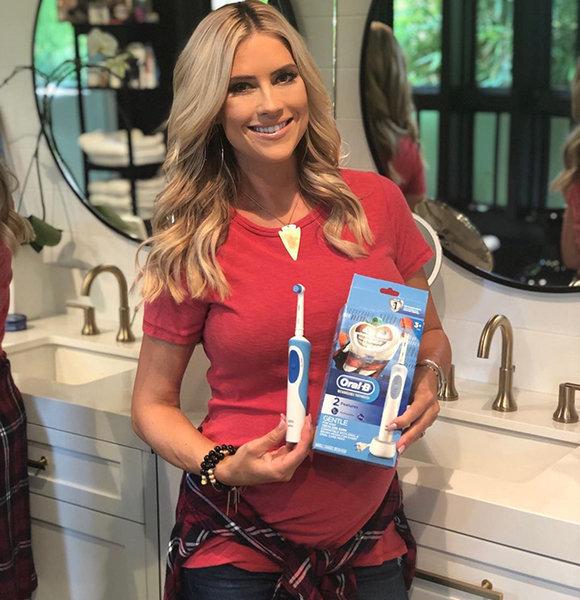 The countdown started for Christina Anstead and husband Ant Anstead as the pair scheduled to welcome their first baby on the first week of September 2019.

Looking at the reports provided by the doctors, the baby boy was expected to be a big one. The news forced the husband-wife duo to choose a safer option of delivery for both the baby and the pregnant mother by having a C-Section.

On 30 August 2019, the TV host had shared her 34-week baby bump on Instagram and referred it as the size of a coconut.

Finally, on the morning of 6th Septemeber 2019, she welcomed her baby boy Hudson London Anstead into the world. The same day she rushed to Instagram to share the good news to her well-wishers. Along with a picture featuring her adorable baby on her arms, she even shared the size of her newborn writing,

Ant and I are so excited to welcome Hudson London Anstead into the world. Our hearts are SO full of love and joy! Our healthy baby boy was born this morning - 9/6/19 - 7 lbs 7 oz 19.5 inches long. Even though Christina is a mother of two children from her previous relationship, this is her first child with Ant. Her husband also fathers two kids from his former marriage. Moreover, her stepchildren's happiness was apparent, judging by Christina's Instagram feed.

Past Relationship With Husband & New Wedding

While it was a moment of joy for both Christina and Ant Anstead, they were not newbies going into parenthood.

Both of them shared a marital relationship before meeting each other. The Christina on the Coast star had been married for five long years with partner Tarek El Moussa since 2009.

The two worked on the same reality show and sprouted love for each other at that time. After just one year of their marriage, they welcomed a daughter named Taylor Resse El Moussa.

Furthermore, in 2013, Tarek suffered from stage two thyroid cancer. Before starting the radiation treatment, the two consciously decided to bank his sperm just in case.

However, the process of vitro fertilization failed, resulting in a miscarriage. In 2015, under very tricky circumstances, the couple nurtured a son named Brayden James El Moussa. But, it cost them their relationship. Igniting some heated argument, the couple parted ways and filed for divorce in 2017 which was finalized in 2018. Similar was the case with her counterpart Ant. The Wheelers Dealers host parted ways with ex-wife Louise after 12 years with two children between themselves.

After facing a similar story, the two tied the knot in December 2018 on what was a secret wedding ceremony conducted amongst close family and friends.

Christina Anstead resided in the hearts of the real estate ever since her graduation from school.

She took up the job of taking old, deteriorating houses and renovating them into new and beautiful homes. During her rise to stardom, her ex-husband also provided a helping hand.

The two started their very own HGTV show called Flip or Flop where they bought a mediocre house, and after making upgrades, the former couple sold the property for profit.

Doing the same, Christina accumulated a net worth of $12 million. Also, she has partnered with her hubby Ant in a new show Christina on the Coast which sees the couple redesign houses and make a living from the same.