By LRU Writer | On: March 03, 2021
New Jersey's First African-American senator, Cory Booker is known for his high-dedication and loyalty to the public service. He is an unmarried politician. He is dating..... But he was once caught with the gay rumors but he finally spoke on that matter. New Jersey's First African-American senator and the 2020 Presidential candidate Cory Booker is known for his high-dedication and loyalty to the public service.

Besides his political career, the unmarried politician also fueled the speculation about being gay, but when he kept aside his closely-guarded personal life, the rumors on his sexuality wept away.

Cory, who was known for confining the love-life, started strolling around with multiple women. Also, he is hitting the many shows for his alleged girlfriend for two years, but he has not run the stone to the married life.

Rumored To Be Gay; Revealed To Have Homophobia

Washington born Cory Booker, whose high school groping story made headlines in 2018, guarded private life led many to speculate that he is gay for the last half- a decade. The word gay and Cory Booker's has been integral for half a decade.

With the questions raising on his sexuality, he openly talked with Washington Post claiming he doesn't care about gay rumors citing that he is straight. He said:-

“...People who think I’m gay, some part of me thinks it’s wonderful. Because I want to challenge people on their homophobia. I love seeing on Twitter when someone says I’m gay, and I say, ‘So what does it matter if I am? So be it. I hope you are not voting for me because you are making the presumption that I’m straight.’â€ˆ”

Previously when he got hit with the gay comment, Cory remained silent whereas his spokesperson declined to comment on his sexuality.

Earlier 2013 an op-ed of 1992 was enacted from his college newspaper, "The Stanford Daily," where he had self-claimed about his early homophobia stating about his tolerance phase.

In his piece of writing titled with "Pointing the Finger at Gays," he opened about the homophobic past. An excerpt of the article reads:-

"I stopped telling my gay jokes. ****, flamers and dykes became homosexuals and people of differing sexual orientation and, of course, I had my gay friend. But I was disgusted by gays. The thought of two men kissing each other was about as appealing as a frontal lobotomy."

He used to sub-categorized gay people with hatred, plain and simple. But he overcame with his homophobia after he talked with the gay counselor.

Cory's choice to keep his private life guarded led him to the gay rumors. However, the speculation turned to be false after he reportedly began dating entertainment lawyer Bianca Levin back in 2013.

Soon after some years, Cory who used to keep his love life closely-guarded made another headline for igniting a romance with a much younger brunette, Instagram poet Cloe Wade in 2016. She is also the former stylist of Katy Perry and was in a romantic relationship with the Hollywood's hottest vampire Robert Pattinson.

The couple also attended a fashion week at a warehouse in Brooklyn's Bushwick neighborhood back in 2016 where the on-looker exclaimed that the pair looked like the couple as they stood holding hands. 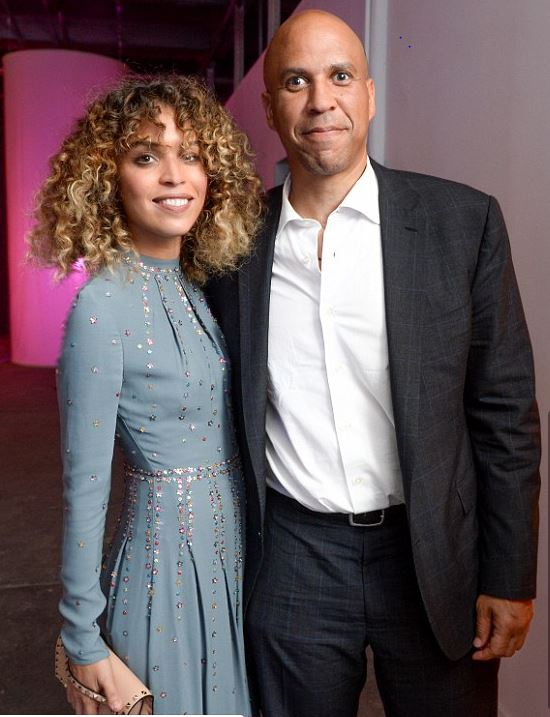 While he had the unconfirmed cozied activities, on the other side, he asked the American actress Mindy Kaling out for dinner on Twitter which she accepted without giving a second thought back in September 2017.

However, though he asked Mindy out in a date, he was still swirling the romantic air with the Cloe Wade in September 2017. He even got spotted at Cleo's new art installation called The Womb.

See Also:- Mindy Kaling is Pregnant, But Who's the Baby Daddy? Boyfriend or Husband?

Their bond was still active in 2018 as the New Jersey Senator Cory Brooker showed his presence at Cleo's book event at the Wharf Heart Talk: Poetic Wisdom for A Better Life. It seemed he wanted to maintain his presence low-profiled. As a result, he confined himself to the reserved section of family and friends.

Though the couple already hit the headline with their dating rumors, Cory and Cleo never publicly confirmed their relationship, but the latter claimed to New York Times in April 2018 that she considers Cory as her family.

In her book's acknowledgment, she quoted Cory as her primary source of inspiration. She wrote:-

“To my partner, Cory, for being a constant source of light and inspiration in my life. You have truly been my rock during this process.”

When the reported asked Cleo to confirmed their relationship status, she declined to clarify her dating life with Cory.

Since both the parties have declined to talk about their relationship, so are they looking forward to surprising their followers with their wedding news similar to the media personality Rylan Clark-Neal's gay-marriage?

Well, similar to his followers, his parents Cary and Carolyn Booker might be willing to see their son walk down the aisle with his wife!

After months of speculation, actress Rosario Dawson confirmed that she and the 2020 Presidental candidate are dating.

The rumors of Cory and his girlfriend Rosario being an item first gained traction in December 2018 when the cameras spotted the unlikely duo at the Regal Union Square theater watching a film.

That very month, the politician and the actress fueled further dating gossips after they attended the Dear Evan Hanson with his niece and her daughter. Until March 2019, the lovebirds opted to keep their relationship an intimate affair. However, all that changed when Rosario confirmed their romance in an interview with TMZ while walking through the Reagan National Airport in Washington, DC.

When quizzed about Corey, the Seven Pounds actress called him "a wonderful human being."