By LRU Writer | On: April 12, 2019
Jussie Smollett is the breakout star of Fox’s Empire, who got an enhanced fan following with his portrayal of the gay character, Jamal. The openly gay actor, who describes his gay role as one of the most beautiful experiences, seems to be similarizing his on-screen role to real-life experiences as well. Digging deep into his real life, it seems boyfriend is not only the preference for Jussie. 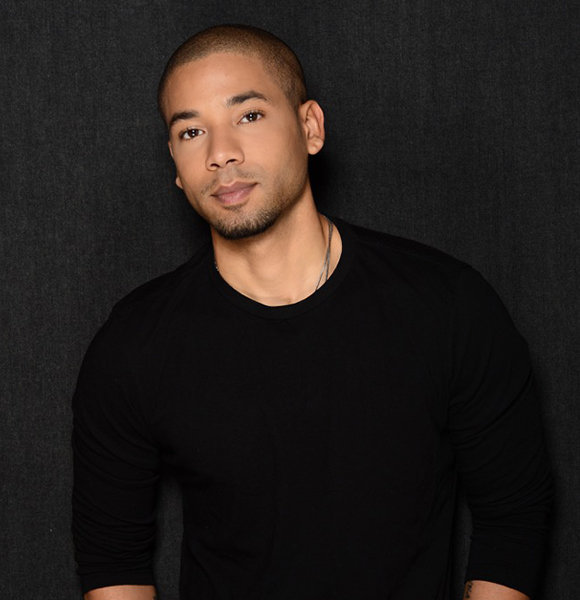 Jussie Smollett is the breakout star of Fox’s Empire, who got an enhanced fan following with his portrayal of a gay character, Jamal.

The openly gay actor, who describes his gay role as one of the most beautiful experiences, seems to be similarizing his on-screen character to real-life experiences as well. But that's not all!

Digging deep into his real life, it seems boyfriend is not only the preference for Jussie. Wondering why? Fetch the answer from the following preface!

The openly gay Empire actor, Jussie Smollett has shared his romance with multiple partners and created a long dating profile. In an interview with the Ellen in March 2015, the 36-year-old actor first time steps out with his sexuality:

“There’s never been a closet that I’ve been in. It was a bigger deal to everyone than it was for me. But at the same time, I do understand why it is something to talk about.”

Additionally, Jussie also said that he talked to Ellen Degeneres publicly to aware the people that they are not alone, and to encourage the people to come forward with their sexuality.

In 2015, Jussie was rumored to hook up with the football player, Michael Sam. But Jussie claimed the news to be fake despite spending a lot of time together with Michael.

Similarly, he once got romantically linked his co-actor, Dustin Ross. The pair, who first met on the set of an indie flick called The Skinny, portrayed the role of on-screen boyfriends. The duo also seemed to be created a real-life romance leading to three years on and off screen relation till 2015.

However, the duo seemed to rekindle their love in February 2015 as they were spotted hugging and sharing a romantic time.

Next, Jussie shared four years on and off relationship with Director Anthony Hemingway as reported in 2016. His sister Jurnee played the role of the bridge to make the romantic bond between her True Blood director and her brother.

Jussie also dedicated a song called "Hemingway" to his then-boyfriend, which he performed on the show "Verses and Flow" in 2015. Jussie's family also referred to Anthony as their future brother-in-law, and Lee Daniels was heard that he prays the couple to be together.

Despite all, the couple silently parted their ways without sharing the separation news on the media. And in 2016, Jussie came up with the most astonishing romance with the Empire creator Lee Daniels at the Human Rights Campaign 2016 Los Angeles Gala Dinner.

When Empire's cast got honored, actor Jussie Smollett went to producer Lee Daniels and kissed him. The kissing scene undoubtedly benefitted the rumors of two openly gay, Jussie and Lee's dating affairs. However, they never confronted the dating news. Similarly, Jussie took no break from 2017 too as he got romantically linked with Tawan Davis. The pair, who both work for the welfare of the African American community, have been protective of their relationship and enjoy hanging out with their family and friends together.

As of now, the openly gay item have been silent about their relationship.

But in May 2018 - without going much further into the details - the Empire actor shared that he was happily "coupled up." To this day, it is still not explicit whether the guy, who officially placed "off limit" stamp on him is his alleged boyfriend Tawan or someone else.

Boyfriend Is Not The Only Essential

The openly gay Jussie Smollett is interested not only in men. In an interview with out.com on March 2016 issue, he shared the exciting fact along with the steamy cover shot. He stated:

"If I fall in love down the road with a woman, I'm going to love that woman."

As he disclosed that he might fall for a woman too, he shared a speculating rumor with a girlfriend.

Well, Jussie's girlfriend rumors date back to 2007, when he was speculated to be dating Raven Symone. The two shared a perfect relationship, which created the buzz that she was pregnant with his baby. However, her team later confirmed that she was never pregnant.

Raven cleared the fake air and revealed that they never shared the romantic relationship. She explained to billboard.com on March 2015 stating,

“We never had a romantic relationship, but we definitely, living in method acting worlds, acted how we normally would (laughs). It was very natural and easy.”

Additionally, she even disclosed that they both were excited to work together in the series, Empire and they are more like the siblings. She stated:

"We had never really worked together; we did a little music together prior to him being on the show, but as my best friend, normally we act like that when we’re out in a club having fun. ‘Let’s do a Greaserendition; let’s pretend we’re a couple and have fun on the dance floor!’ He’s my bro.”

Well, for The Mighty Ducks actor, it seems boyfriend is not only his limit.

Jussie made headlines after he claimed that two white masked men attacked him while hurling racist and homophobic insults. The attack which - the actor claims - took place on 29th January 2019 also saw the alleged perpetrators pour chemical substance on him and place a rope around his neck.

From the start, the authorities tasked with solving the case sensed severe doubts over the Empire actor's claims.

Two weeks after the initial police report, the law enforcement agents in Chicago arrested two Nigerian brothers - Olabinjo and Abimbola Osundairo - who were returning to the US after fleeing the country following their alleged attack.

Two days of intense questioning followed. And at last, the Osundairo brothers - who were extras on the set of Empire and knew their alleged victim well - confessed to receiving $3500 payment from Jussie to stage the attack.

Soon the support rallied behind him turned into disdain right before his eye. Even the rumors of Empire producers considering a possible suspension against its disgraced star was beginning to make waves.

Empire Actress You Might Know:- Empire's Taraji P. Henson Getting Husband As Baby Father's Death Lingers In Past

On 21st February 2019, the Chicago Police officials revealed that they had charged Jussie with filing a false police report via a press conference. Per the statement, the actor had staged the hate crime hoax because he was unhappy with his salary on Empire. Within hours, The Skinny star - who once famously claimed to refuse a white boyfriend plot on the FOX series Empire - surrendered himself to the police.

Upon the revelation, the whole of show-biz professed utter shock and disbelief, but none commentary was more attention-grabbing than the one made by President Donald Trump, who called out Jussie for his racist and dangerous comments.

Although all fingers pointed at him, Jussie didn't leave any stone unturned to prove his innocence: and in that part, the cheque he gave to Abimbola Osundairo came to play. Though the said cheque was allegedly reported to have been given to the brothers to stage the hate crime, Jussie claimed to have given the money for his training, for preparing his body for the music video, Don't Go.

The memo of the cheque he gave had the “5-week Nutrition/Workout program (Don’t Go)” written in it. Further evidence to support the claim came forward after the series of text messages of Jussie and his alleged perpetrator, Abimbola highlighted their conversation on diet plans.

Furthermore, just before hours of the stated attack, Abimbola had texted him:-

“I know you’re travelling today, make sure you get at least 45 mins of cardio.”

Accepting the evidence of Jussie before a grand jury, the two attackers testified that they had received the payment only for training.

Criminal Charges Against Jussie Gets Dropped

From then onward, it was clear that the prosecutors would have a tough time convicting Jussie of the alleged crimes.

And on 26th March 2019 - about a month after getting released on bail - his lawyers issued a statement claiming that the Chicago PD agreed to drop the criminal charges against the Empire star.

Following the revelation, a relatively shaken Jussie spoke to the reporters and once again asserted any wrongdoings. He said:-

"I've been truthful and consistent on every single level since day one. I would not be my mother's son if I was capable of doing what I was accused of."

His Empire co-star Taraji P. Henson was one of the first celebs to react to the news. In her appearance on USA Today, she expressed joy by claiming that the truth has been set free. Actress Gabourey Sidibe and director extraordinaire Ava DuVernay also chimed in with supportive comments.

The Mayor of Chicago, Rahm Emanuel's reaction to the news was a tad bit different. He called the agreement "a whitewash of justice" and at one point questioned Jussie's decency as a man.

On 28th March the Chicago Police Department ordered him to pay $130,000 as the cost of the investigation. According to the department, dozens of workforce worked extra time to look into his alleged false charge. And that leads to waste of the resources which could have been used for other pressing matters.

After the actor failed to pay the fine demanded by Chicago PD, the police department is taking the legal route to reimburse the amount from him. Jussie was given a week time to make the payment; however after he showed no signs of compensating, the authorities have taken the harsh step of suing him.

Reports suggest that Jussie could be sued for three times the initially demanded amount, which means the actor may have to pay $3,90000 for his ignorance.

Life After Getting Embroiled In Controversy

Since the start of 2019, things didn’t look good for the Empire actor. Still, after being proven not guilty, the actor didn’t seem to catch a break.

As if the fine was not enough, the President of the United States of America himself tweeted that the FBI needed to look into Jussie’s case.

With difficulties on his way, the actor of color found a silver lining with the happy news after being nominated for Image Awards' Outstanding Supporting Actor in a Drama Series category. It was his fourth consecutive nomination for his part in the hit drama Empire. Although he managed to form the group in 2017, it was unfortunate for him to lose the award in 2019.

In the award ceremony, which took place in late-March 2019, Jussie lost the Outstanding Supporting Actor category to actor Jesse Williams. Jesse won the honor for his performance in the ABC's famous show, Grey's Anatomy.