By LRU Writer | On: September 02, 2019
Skylar Astin is a household name courtesy of his role Jesse Swanson in the pop culture phenomenon film, Pitch Perfect in 2012. He later...In 2019, he voiced a character called Branch in TV series, Trolls: The Beat Goes On! ...Skylar’s marital status changed from married to divorce when his wife... 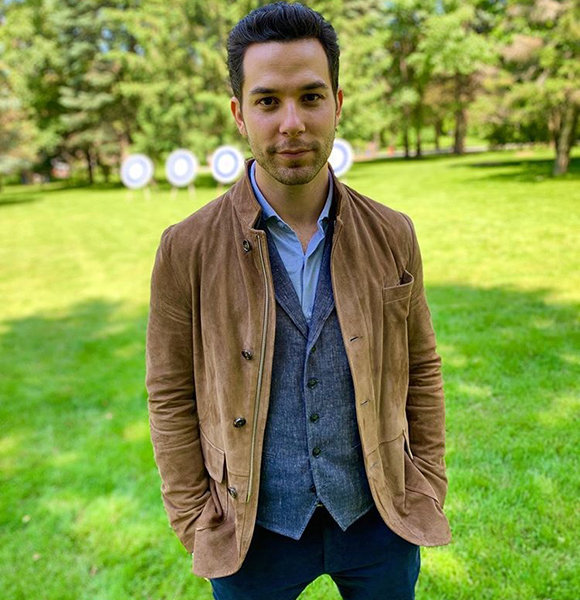 Skylar Astin is a household name courtesy of his role as Jesse Swanson in the pop culture phenomenon 2012 film, Pitch Perfect. He later reprised the part in the movie’s second part in 2015. For playing the beloved character, Skylar took home the Teen Choice Award in 2012 and 2015.

In 2019, Skylar voiced a character called Branch in the TV series, Trolls: The Beat Goes On! Further, Skylar's projects, namely Secret Society of Second Born Royals and Ghosts of War are in post-production as of August 2019.

Skylar’s marital status changed from married to divorced when his wife, Anna Camp, filed for divorce in April 2019. The estranged couple’s reason for separation was the good old, "irreconcilable differences."

Excitingly, the pair’s relationship had blossomed from the said movie’s set. It was love at first sight for Skylar, age 31, while Anna enjoyed his company initially. Slowly, their friendship turned into a romantic relationship. The news of them dating only came out in June 2013. When the news broke out, Anna was in the process of divorcing her actor husband, Michael Mosley. After getting a divorce from her ex-husband, Anna and Skylar’s relationship became serious.

Thus, the pair got engaged around New Year 2016 during a holiday to Hawaii. The couple then got married in September 2016 at California’s central coast.

However, after just two years of their marital relationship with each other, the couple were back to where they started. They confirmed their seperation in April 2019 via a divorce filed by Anna.

After, many investigations and mutual understanding, the pair agreed not to claim any spousal support and split any remains of their shared property equally.

In 2019, the divorce filed was officially on formulation and the former couple explained thier decision saying,

We can confirm that we have decided to separate, and this decision was made mutually and amicably

Following the split with Skyler, Anne justified how the split with her former husband helped her rediscover herself personally and emotionally. Also adding to the same, she said that singlehood was a vulnerable place to be in but also an empowering journey. The ex-couple has now decided to focus more on their career going ahead in the future.

In preparation for their new-life, Skylar and his girlfriend had purchased a 1923 Spanish-style abode at Los Angeles for $1.98 million before their wedding. Sadly, the couple put up the house also on sale for $2.6 million following their split.

Although exact dealing of their assets remains a secret, Skylar boasts a net worth of $1 million as of August 2019.

Post his devastating divorce, Skylar is leaping faith in his personal life. The 21 & Over star is reportedly on Raya - an invite-only dating app - popular among celebrities. Celebs like John Mayer and Chelsea Handler were also users of the app.

Before his marriage and after divorce with Anna, Skylar dated a few celebrities. The actor of Ashkenazi Jewish ethnicity dated musician Jessica Bridgeman in 2008. But, the affair ended in the same year.

For You:- Peyton List Split, What Caused Boyfriend Cameron Monaghan Break Up?

Following the split, Skylar dated Lauren Pritchard and was in a rather serious relationship with the singer. However, the pair parted ways after three years in 2011.

After a series of broken relationships, maybe the actor of height 5 feet 9 feet (1.75 m) will finally find love via the Raya app.