By LRU Writer | On: September 23, 2018
Intimate wedding for Genevieve Gorder leading to Morroco celebration! American television host and interior designer, Genevieve Gorder has exchanged the wedding vows for the second time with her new boyfriend-turned-husband, Christian Dunbar, who is a furniture designer. 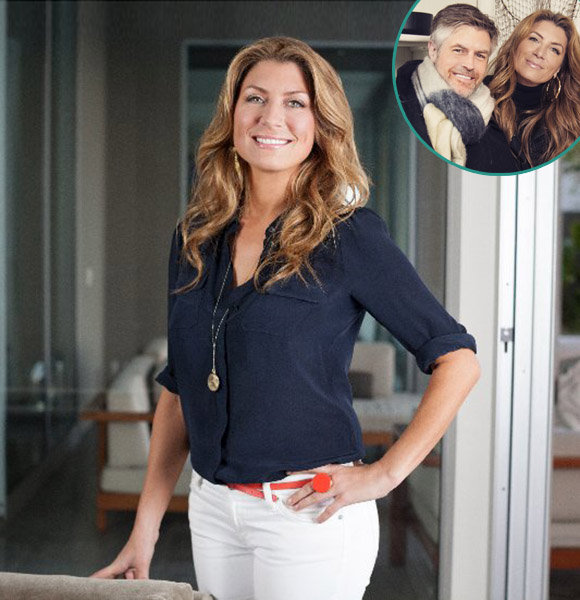 American television host and interior designer, Genevieve Gorder has exchanged the wedding vows for the second time with her new boyfriend-turned-husband, Christian Dunbar, who is a furniture designer.

The pair had a small intimate wedding ceremony before they jetted off to Morocco for their big day celebration accompanied by their family and close friends. While in Morocco, the newly married couple threw a ravishing dinner as a welcome to all their invited guest at the Riad Kitula in Marrakech.

The centerpiece of after wedding celebration was a long table with breathtakingly beautiful decor surround by greenery. Gorder, her husband, and friends arrived in the city of Essaouira earlier this week.

The couple along with their guests has been occupying themselves with tasting Moroccan dishes, going for camel rides, shopping through the local market and taking in the local Moroccan feels. Well, Genevieve had her wedding celebration just the way she wanted it to turn out. Previously in May, just a few months before their actual "I DOs," she opened up with PEOPLE revealing that she wanted a traditional intimate wedding followed by a "super sexy dinner party" for her friends.

Just like she wanted, Genevieve had an intimate wedding alone with her daughter and threw a fun dinner party for her friends.

Genevieve began her wedding plannings after she got engaged in February 2018. Christian got down on one knee and popped the question to Genevieve while presenting her with an engagement ring less than a year since they began dating.

The host of Genevieve's Renovation, let the news of the engagement out in the open via an Instagram post along with a peek at her engagement ring.

Even though Genevieve loved where he life was prior to the engagement, she later divulged that her love for Christian was something big and she was willing to interrupt her beautiful life for the sake of being with him.

On the other hand, Christian is equally into romance just as Genevieve as he had a crush on her for years. A friend of Genevieve introduced them and their phone calls and text eventually stretched into an 8-hours long conversation just like their casual dating turned into a serious relationship.

Prior to her relationship with Christain, Geneve was rumored to be dating Anthony Carin, who is the co-host of HGTV's Kitchen Cousins. Their rumored relationship came just after Genevieve split from her husband Tyler Harcott back in 2013.

Genevieve and Tyler also share a daughter Bebelle together!