By LRU Writer | On: March 22, 2019
A fairy-tale wedding for The Bachelor stars! Bachelor Nation's Lauren Burnham, age 27, and Arie Luyendyk Jr., age 37, tied the knot in a fairy-tale wedding ceremony held in Hawaii on 12th January 2019 as per a report by US Weekly. 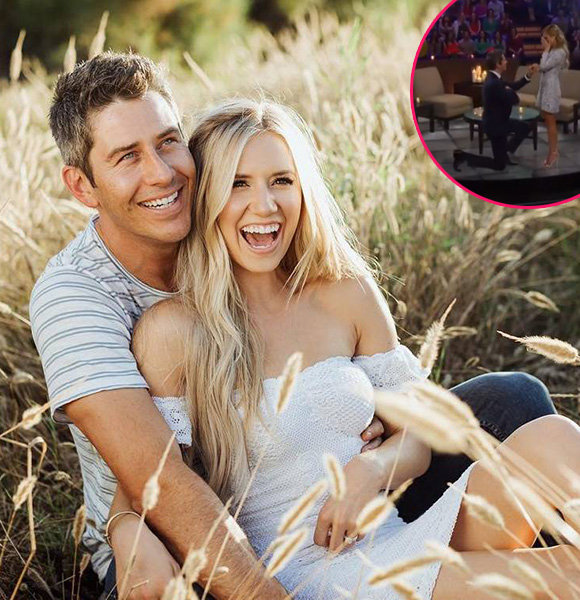 A fairy-tale wedding for The Bachelor stars!

Surrounded by close friends and family, the pair got married in a non-televised festivity at the Haiku Mill in Maui. Chris Harrison, The Bachelor's host, officiated the romantic ceremony. The groom confirmed the news while talking to the US Weekly,

"Ever since we've gotten together, we wanted to fast-forward to this day, and talking about getting married and wanting to do that, even last year, so it’s awesome that the day is finally here.”

Initially meeting on the set of The Bachelor's 12th offering in 2017, Lauren and Aire's whirlwind romance saw the latter propose fellow Bachelor star Becca Kurfin in the season's finale; only to have a change of hearts and get together with former.

After breaking off the engagement with Becca, Aire popped the big question to Lauren, The Bachelor Season 22's runner-up during a live, After the Final Rose special in March of 2018. Labeling Lauren his "soulmate" at the time of the proposal, the real estate agent-cum-reality star said:-

“I made some bad decisions but the best decision was running back to you." As for a reason for making it a public affair, Aire claimed that his decision got motivated by the guilt factor.

Since getting engaged, Lauren and her fiancee-cum-husband moved in together in Phoenix, Arizona. And in November of 2018, then-yet-to-be married duo announced that they were expecting a baby boy; later, they found out it was a girl instead.

From Bachelor Nation:- Bibiana Julian Age 31 & Peter From 'The Bachelor' Are Dating & It's Official

The reality star and husband, Aire celebrated the news by throwing a combined bachelor and bachelorette party at The Venetian in Las Vegas. Along with their close friends Jenna Cooper, Sienne Fleming, and Jacqueline Trumbull, the pair partied at Thunder From Down Under, TAO nightclub and more.