Taylor Lautner is dating and he put a "kiss" on his new girlfriend!

The Twilight actor went official on Instagram with his new girlfriend last weekend, i.e., on 28 October 2018 as he posted a picture with his beau both dressed as Space Jam's Tune Squad members.

The photo showed Taylor gently kissing on his girlfriend's cheek as she looked comfortable in the actor's company. According to his girlfriend's Instagram, Tay is currently pursuing Nursing education but hasn't disclosed much about her details.

On 17 September 2018, Tay had posted a picture alongside Taylor meaning that they must have been dating for more than a month. The portrait was taken at a wedding which could imply that the couple could be serious about their relationship and might even be planning a wedding shortly. 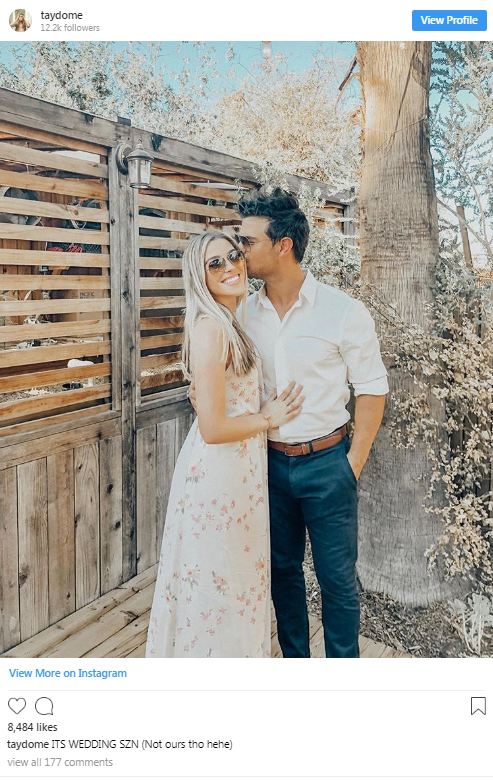 Taylor and girlfriend Tay at a wedding on 17 September 2018 (Photo: Tay Dome's Instagram)

"Your strength & constant trust in the Lord have never failed to inspire those around you. Praise to a sovereign God and a successful procedure!â£ï¸"

As of today, Taylor is not much busy with his professional life, thus he could be enjoying his free time with his latest girlfriend.

Taylor, age 26, is an American actor known for movies and TV shows including Scream Queens, Twilight, Valentine's Day, The Adventures Of Sharkboy And Lavagirl 3-D, and more.

Taylor, who was once rumored to be in a gay relationship with underwear model Murray Swanby after he was photographed at a gay bar, has been previously involved in several heterosexual relationships and has also linked with several Hollywood celebrities.

The actor's high school girlfriend, Sara, also Taylor's first lover, but they broke up after he found fame in the acting industry. Similarly, he was also linked to singer Selena Gomez after they were captured hanging out together on various occasions.

Another of Taylor's high-profile ex-girlfriend is Taylor Swift, whom he started dating after they worked on the 2010 movie, Valentine's Day.