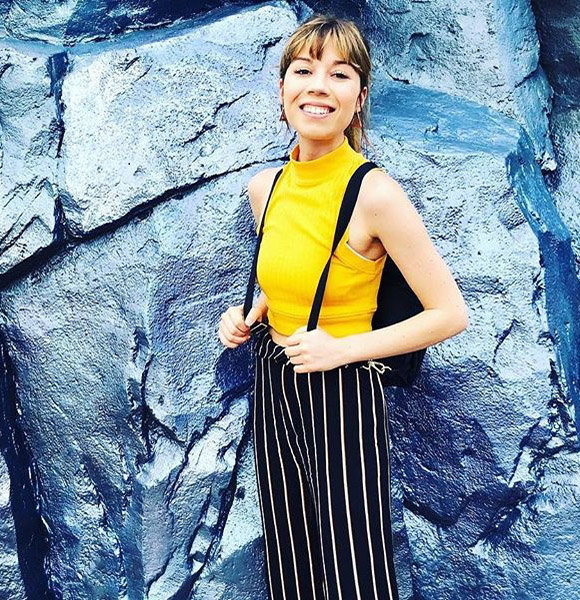 Jennette McCurdy is adored and even worshipped by a few for her teenage roles in the Nickelodeon shows like iCarly and Sam & Cat.

Apart from being an established actress, questions about her dating life are always on the rise.

Single now actress Jennette has a history of dating famous personalities ranging from actors, singers, and athletes. From 2004 to 2008, there were rumors about her relationship with American actor Graham Patrick Martin. However, neither of them ever confirmed or denied dating each other.

Although her rumored boyfriend made an appearance on iCarly later in 2019, it turned out they were never lovers. Jennette admitted that she was dating a guy named Paul Butcher at the same time rumors were circling.

Adding on to assumptions, there was another rumor in 2010 about her possible fling with Max Ehrich. But, the actor came forward through Twitter, shutting down dating rumors and reclaiming their relationship as just good friends. Likewise, she was in a very short-lived relationship (for a month) with NBA player Andre Drummond in 2013.

The actress got acquainted with Andre online before officially going on a date with him. However, despite the short-lived relationship, it was among her best memories which she publicly recalled in an essay for the wall street journal.

In 2015, she dated her co-star Jesse Carere. The pair were spotted attending a baseball game together in May 2015.

Further, Jennette was also in a relationship with actor Paul Glaser but broke up after her mother's death.

As of now, the singer is rarely seen sharing her personal life as she prefers to focus on her career for now. Keeping all her romantic life under wraps, Jennette is not married, or just as we know of.

Jennette was born on 26th June 1992 in Los Angeles, California. Raised by father Mark McCurdy and late mother, Debra McCurdy. Her mother struggled through a long battle with breast cancer, which started to show up in 1996.

Sadly, even after going through various medical procedures, she passed away in 2013. Unfortunately, her late mother had a huge negative impact on the actress’ struggle with Bulimia, an eating disorder.

Jennette once wrote how her mother was harmfully concerned about keeping a straight check on her weight, which affected the actress mentally.

The 29-year-old singer is also the youngest and the only daughter among her siblings. Her older brothers are  Marcus, Scott, and Dustin McCurdy.

With an increase in fame, the actress got into singing, officially by releasing her 2011 single, Generation Love.

Moreover, she was nominated four times in the category of Outstanding Young Performers at the prestigious Young Artist Awards until 2010. Also, in further years, she eventually took home Kids Choice Awards twice in the category of Favourite TV Actress.

She is a filmmaker who directed her first TV movie titled The McCurdys in 2017. Besides her successful show iCarly, the artist also appeared in the hit show Sam & Cat playing the role of identical twin sisters named Melanie Puckett and Sam Puckett.

Moreover, she earned about $50 thousand per episode from the shows, which helped her to grow her net worth to millions.

Due to her remarkable list of acting credits in films and TV shows, she already has a net worth of $3.5 million, according to celebritynetworth.