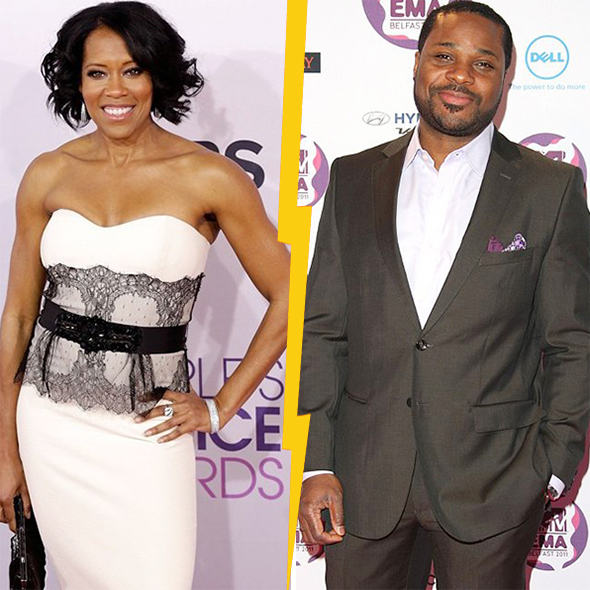 It looks as though, after staying single for a couple of years, American actress Regina King will get back on the dating runway. The talented actress has been looking up to her significant one for a long time as she revealed the criteria required to be her boyfriend.

However, she enjoyed the perks of married life and is also a blessed mother.

But her married life with her husband came to an end pretty soon.

Let's find out more about her divorce.

Regina married Ian Alexander Sr. in 1997. The pair dated each other for three months before getting married. Regina King with Ian Alexander Sr. at the 77th Annual Academy Awards in the United States in 2006. (Photo: gettyimages.com)

With a quiet married life, the pair also shares a son, Ian Alexander Jr., who is now 23. But her beautiful married life didn’t last long as Regina and her husband separated in 2007.

The two divorced after a decade-long getting married, putting forward Ian's extramarital affairs as the ultimate reason. In addition to that, Ian’s abusive nature towards Regina was also supposed to be another cause for their beautiful married life to end in divorce.

Leaving behind the married life with her husband, Regina dated Malcolm-Jamal Warner for several years.

Before dating Regina, Malcolm had several high-profile affairs with fellow Hollywood stars, including a seven-and-a-half-year relationship with actress Karen Malina White. Everyone thought Malcome would get married to Karen, but that did not happen. Likewise, Malcolm was by his actress girlfriend Michelle Thomas' bedside when the latter died in 1998. Regina and Malcolm's relationship faced the same fate. After remaining together for nearly two years, instead of getting married, the pair decided to part ways in March 2013.

As Warner revealed, the duo was able to keep their togetherness out of the spotlight, but their split in 2013 created a buzz in the air. Malcolm disclosed about their break off, where he said,

“I think what Regina and I—you know, we had been together for several years before people realized we were together. So, unfortunately, our breakup got more coverage than our being together, and that kind of sucked 'cause we spent so much time trying to keep it out of the public eye, and then the breakup was so much in the public eye. So all relationships have their share of obstacles, and you just try not to have yours plastered."

After the breakup with Regina, Malcolm is yet to get linked up with any woman and is probably not married. On the other hand, Regina is still single and speculated to be gay.

Looking at her dating history and married life, she doesn't seem to be a lesbian.

However, after her failed married life, she has shared some requirements for her future boyfriend.

‘American Crime’ actress Regina, while making her appearance on “The Wendy Williams Show” in March 2015, tackled the topic of dating. She shared with Wendy about her expectations from a boyfriend. During the interview, she said,

“You need to do better job at it.”

“I've been so busy with work, and my girlfriends are like, 'Do you think a man is just gonna go knock on the door, like, 'I'm here!'?' And I think I wish he would, but I have to make that more of a priority."

Thinking of taking her career and love life alongside, she stated her will to involve in dating again.

During the interview, on the very topic of dating, Wendy asked,

” Can he be the plumber or does he have to own the plumbing company?"

“I mean, look, look, this is the thing. I think you can find love anywhere, and my heart is open to it, but I would like to have...if I can pay for us to go on a vacation, all expenses paid out of my  own pocket, then he should be able to do that as well."

Well, that’s true, you can find love anywhere you need to keep your eyes wide open. So that is what Regina might be following so far. Or maybe, she is focusing more on her career than on getting married and settling down.

The Emmy-winning actress King was born on 15 January 1971. She was born to a special education teacher mother and an electrician father. She has a younger sister, who is also an actress.

King was signed out with ABC’s studios for two years in 2017. For the particular project, King’s sister, who has got a similar name as Regina, Reina King, served as a development executive. Both names of the sisters, Reina and Regina, mean queen in Spanish and Latin, respectively.

King's got into the acting arena in 1984, starring in television’s ‘227’ in the lead role. She then got her feet in different movies and TV shows. She is best recognized for her performance in ABC’s ‘American Crime,’ for which she won two Emmy Awards.

She is also running a charity foundation, ‘I Have a Dream.' All her work as an actress and television director has contributed to making her net worth a good figure of $16 million.

Adding up to her resume, the veteran actress picked up her third Emmy in 2018. Regina was named the winner of Outstanding Lead Actress in a Limited Series or Movie for her role as Latrice Butler in the Netflix series, Seven Seconds. The announcement came as a surprise to her as she was not expecting to have it on her name that night. However, the crowd inside Los Angeles Microsoft Theater appealed to her, and she a standing ovation from her fellow nominee Sarah Paulson.

You May Also Like: Is Kenneth Choi Married Man With Wife Or Just Committed To Hard work?

Announcer Leslie Jones was more than excited for her and cheered for her all along the way. Even Netflix made sure to congratulate her the other day for her win, stating "she deserves the world."

However, some fans of Seven Seconds mocked the tweet as the series got canceled after the first season's airing.

When asked about her inspiration behind her Emmy-winning role by Vanity Fair, she said:

"Just being a parent. A lot of it is pulling from that right there."

Regina shared how her experience of parenting Ian helped her win an Emmy. Her portrayal of a grieving mother in Netflix's Seven Pounds saw the actress channel her motherly instincts.

In the same interview, she opened up about how some scenes in the show helped her tap into her deep-seated parenting issues.

Regina continued her stronghold on Hollywood by providing the movie-goers with a stellar performance in Barry Jenkins' critically acclaimed romantic flick, If Beale Street Could Talk -- a movie based on James Baldwin's book of the same name.

Her portrayal of Sharon Rivers - arguably her most notable performance on the silver screen to date - has drawn widespread traction, so much so that she has received National Board of Review, New York Film Critics Circle prizes, and Spirit Award nomination for her supporting role.

The crème de la crème of the awards has come in the form of Palm Springs International Film Festival's Chairman's Award.

Regina credits her success to her ability to make people uncomfortable with her acting performances on-screen. In December 2018, during an interview with BuzzFeed News' Profile, she claimed:-

“I like to see people uncomfortable. I think that that’s when you get really to the truth.”

A week before her BuzzFeed interview, she sat down with fellow Hollywood heavyweights, including Lady Gaga, Nicole Kidman, Kathryn Hahn, Rachel Weisz, and Glenn Close, to discuss the challenges facing women in the industry.

At the 91st Academy Awards held in Dolby Theater in Hollywood in February 2019, Regina won her first-ever Oscar for her portrayal of Sharon Rivers in If Beale Street Could Talk.

In her acceptance speech, the Emmy winner thanked her family for their endless love and support. Talking to CNN after her win, Regina claimed that she had been "preparing for this role all her life."

Regina became the only third African-American woman in history to have won both Oscar and Emmy with the honor. Actresses Viola Davis and Halle Berry are the other two.

Through her production company and working behind the camera, the mother of one hopes to tell compelling stories with women as the central figure. But, by her admission, she doesn't want to rest on her laurels.

In April 2019, Regina reprised the role of Janine Davis in The Big Bang Theory's episode titled The Inspiration Deprivation.

Despite receiving so much love and prayers from her fans worldwide, Her life came crashing down when she had to lose her son.

Ian Alexander Jr., Regina’s only child with her ex-husband, died by suicide at the age of 26. 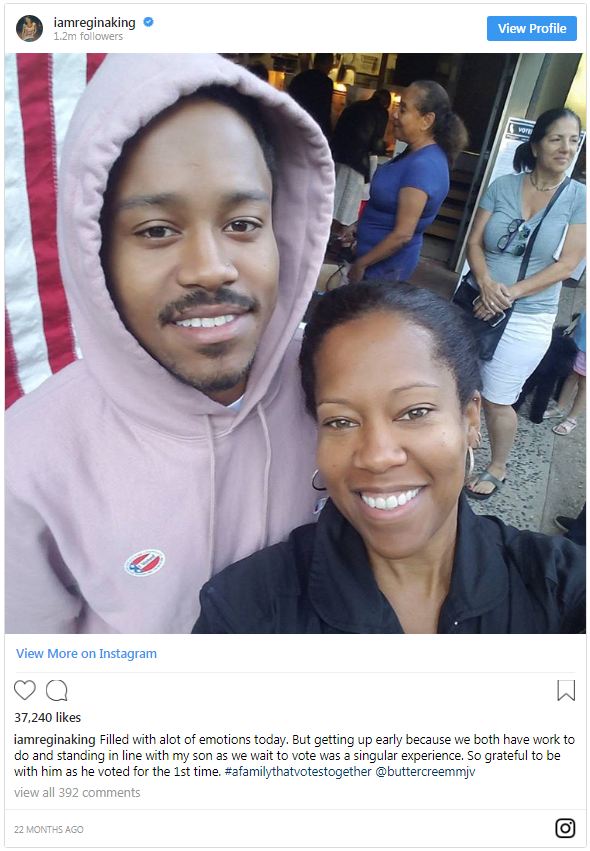 Regina first shared the death of Ian. Regina pleaded public to give her family privacy during this hardship.

Even though the real cause of his death was not revealed at first, the Los Angeles Country Coroner’s spokesperson later confirmed Ian’s death as suicide.

Ian has followed his dad’s steps and became a DJ and singer-songwriter. Ian did write about his upcoming event at Bardot three days before his death. However, there has been no word on why he took that action.

One time he did mention social media being toxic for him. Yet, we can't conclude anything about his motive without more evidence.

Regina hasn't posted anything on social media since the death of her only son. We're sure she's heartbroken by losing someone she loved more than anyone.

We hope she is in good health. We will surely update you guys more on Regina King in the future. Till then, stay tuned.